'The unity which you have shown till now, the same unity you have to show in the House,' Rajasthan CM Ashok Gehlot told legislators as the Assembly Session nears. 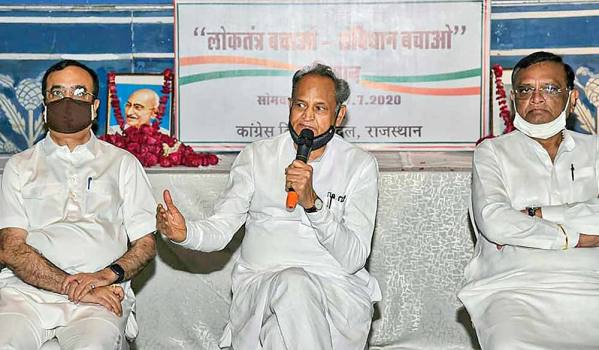 Rajasthan Chief Minister Ashok Gehlot on Sunday asked the party legislators to show their unity on the floor of the House.

Addressing a Congress Legislature Party (CLP) meeting at a resort in Jaisalmer, he said, "We are all democracy warriors. We are going to win this war and also win the (assembly) election after three-and-a-half years."

"The unity which you have shown till now, the same unity you have to show in the House," the chief minister said.

The state has been witnessing a political turmoil after the rebellion by Sachin Pilot and legislators loyal to him.

The state assembly session will start on August 14 and Gehlot is likely to seek a trust vote during the session.

Gehlot asked the legislators to tour their respective areas and submit a list of public welfare works, adding that the government will work on them.

He also exuded confidence of winning the battle against the coronavirus pandemic.

Congress national general secretary Avinash Pande said the party has a history of struggle since and before independence. He also thanked the legislators of other parties supporting the Congress in the present political crisis in the state.

Congress MLAs are currently holed up in a Jaisalmer hotel as the party has accused the BJP of horse-trading following the revolt by Pilot and 18 MLAs loyal to him.