Sikh Delegation Meets PM Modi In US, Thanks Him For Removing Blacklisted Names From Community

The Indian government last week removed from its blacklist names of 312 Sikh foreign nationals involved in anti-India activities after a review carried out by different security agencies on the Adverse List or blacklist. 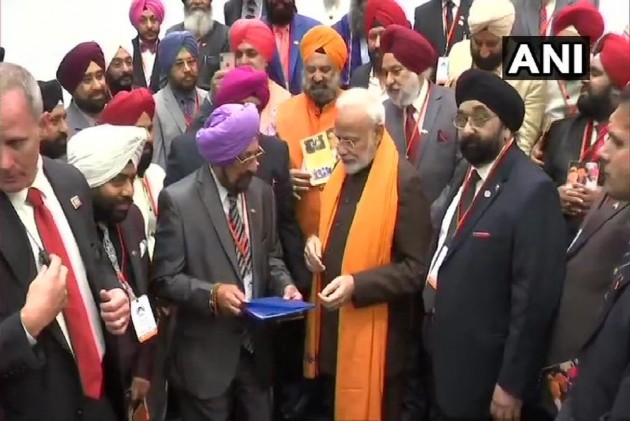 A 50-member delegation of Sikhs from across the US met Prime Minister Narendra Modi here and thanked him for removing the names of over 300 community members from the blacklist.

The Indian government last week removed from its blacklist names of 312 Sikh foreign nationals involved in anti-India activities after a review carried out by different security agencies on the Adverse List or blacklist.

The community members met Modi on Saturday in Houston and presented him with a traditional Siropa (long scarf).

They thanked him for removing from the blacklist names of Sikh Americans.

“We urged the prime minister to provide visa and passport services to the Sikh political asylees. This is important for the large Sikh community living in the US to visit India in a year when we are celebrating 550th birth anniversary of Guru Nanak Dev ji,” Indiana-based Gurinder Singh Khalsa, who was part of the delegation, said.

Prime Minister Modi later tweeted, "I had an excellent interaction with the Sikh Community in Houston. I am delighted to see their passion towards India's development!"

In his brief remarks to the Sikh delegation, Modi said that he has a surprise and good news for them in the next few days and urged them to wait for the news.

MEA Spokesperson in a tweet said that the community members congratulated Modi on some of the path-breaking decisions taken by the Indian government.

"He spoke from his heart. He is a great friend of the Sikh community,” Khalsa said.

The community members also applauded Modi for taking steps to address their concerns and fulfilling promises he made to them in their previous meetings.

Bahadur Singh, a businessman from Oregon who was part of the delegation, said that no other Indian prime minister has done so much for the Sikh community than Modi.

“It was a great opportunity to meet him. He is fulfilling all the promises he has made to the Sikh community,” Singh said.

The delegation also presented Modi a memorandum listing their demands.

“We are thankful to you and your administration that several issues mentioned in that memorandum were resolved. However, there are some more unresolved issues. We have outlined issues that the NRI Sikh community and Sikh Community in large is enduring and request you to address these issues in near future,” the memorandum said.

Among the prominent members of the 50-member delegation were Satpal Singh Khalsa from New Mexico, eminent Sikh businessman Darshan Singh Dhaliwal from Milwaukee, Rachpal Singh from Indiana and Jaswinder Singh from Illinois.

The memorandum thanked the prime minister for bringing to justice some of the perpetrators of the 1984 anti-Sikh riots.

“We request you to ensure that justice prevails, and Sikhs in India get justice and dignity which is their right under the constitution of India,” it said.