The video of the confrontation, which lasted over five minutes, was shared on Facebook by Dave Parkash, 23. 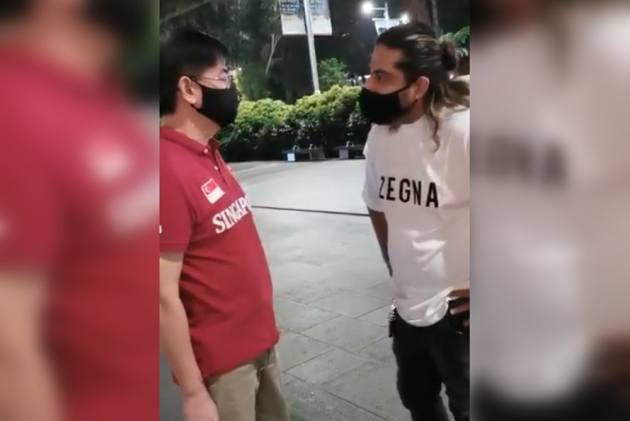 A video of a Singaporean man allegedly making racist remarks against an Indian-origin man has gone viral on social media.

The Singaporean man in the video made racist remarks against the Indian-origin man for dating a Chinese woman, drawing a strong reaction from the Home Affairs and Law Minister who described the incident as "quite unacceptable" and "very worrying".

The video of the confrontation, which lasted over five minutes, was shared on Facebook by Dave Parkash, 23.

In the video, a Chinese Singaporean man accused Parkash of "preying on a Chinese girl". The man also added that a Chinese woman should not be with an Indian man, The Straits Times reported.

The video was shared nearly 3,000 times less than three hours after it was shared on Sunday.

Commenting on the video, Home Affairs and Law Minister K Shanmugam said that while he does not have the full facts of the story, it seems like more people are finding it acceptable to make "in-your-face" racist statements openly.

Describing the incident as "quite unacceptable" and "very worrying", Shanmugam said that he used to believe that Singapore was moving in the right direction in terms of racial tolerance and harmony, but in the light of recent events, he is "not so sure" anymore.

In the video, Parkash also clarified that he is half-Indian and half-Filipino while his girlfriend is half-Singaporean Chinese and half-Thai.

"We both are of mixed race but we are proud to be Singaporeans," he said.

He added in his post that he felt "embarrassed, humiliated and hurt" by the way he was being treated by another fellow Singaporean.

Parkash said the man told them they should only date "people of our own race".

"He called himself a racist and even blamed us for being racist just because (we) are from different races," Prakash was quoted as saying.

"Love is love. Love has no race, love has no religion. You and I should be able to love whoever we wanna love. Let's not become like this man in the video."

Parkash's post added, "To this man who may end up watching this, I hope you learn to stop being a racist and let us all live in harmony."

The video sparked an outcry against the racist behaviour by the stranger, with many calling for the authorities to deal with the man for harassing  Parkash and his girlfriend, Today Online reported.

Facebook user Nora Kamsari praised Mr Parkash for being calm throughout the incident, adding: “You guys are a beautiful couple. Keep the love strong and ignore this self-entitled caveman.”

“The behaviour of the guy in red is disgusting. I would have called the cops on him,” wrote another Facebook user Lim Deqiang.