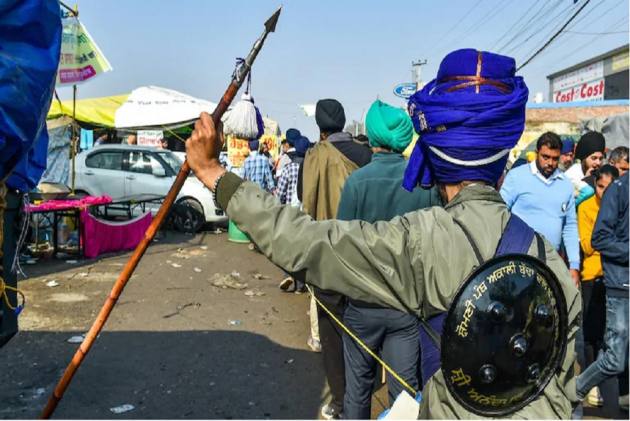 The police on Saturday arrested the second member of the Sikhs' Nihang order in connection with the lynching of a Dalit labourer at the farmers' protest site at Singhu on Delhi-Haryana border.

Meanwhile, the victim's family questioned the attackers' claim that he had committed sacrilege and demanded a high-level probe into the incident.

The mortal remains of Lakhbir Singh were cremated at his native village in Punjab's Tarn Taran amid tight security in the presence of his close family members. No Sikh priest was present to perform Ardas (Sikh religious prayer) and no one from his village Cheema Kalan attended the last rites.

Sarabjit Singh, arrested on Friday for the brutal killing of Lakhbir Singh, was produced before a Sonepat court in Haryana and remanded in police custody for seven days.

Narain Singh, however, claimed that he had informed the police that he was surrendering.

Talking to the media before his arrest, Narain Singh was unrepentant and said that Lakhbir Singh had been “punished for sacrilege". He said that the accused in the Bargari sacrilege incident in Punjab were yet to be arrested, but now if somebody will commit "such a heinous crime he would be punished on the spot".

Narain Singh was given a robe of honour and a garland of currency notes by some people when he paid obeisance in the Amarkot Gurdwara before his arrest.

According to police, Sarabjit Singh has claimed the involvement of a few more people in the gruesome killing, which has sparked outrage and has triggered calls for action to clear the protest sites on Delhi's borders where farmers have been camping since last November to press for the scrapping of the Centre's three agri laws.

Farmer union leaders, however, asserted that the incident will have no impact on the agitation and said they will upgrade security by installing CCTV cameras and increasing the number of volunteers at the protest sites.

Punjab's Deputy Chief Minister Sukhjinder Singh Randhawa  demanded an inquiry by a sitting judge to find out “actual cause” of the incident and alleged it was an attempts to sabotage the farmers' agitation.

Randhawa, who also holds the Home Department portfolio, in an official statement, said that “this is a very sensitive issue, which is related to the religious beliefs of the people and associated with the farmers who had been peacefully protesting from almost a year against the draconian farm laws of the central government”.

The body of Lakhbir Singh was found on Friday tied to a barricade at the Singhu border with a hand chopped off and multiple wounds caused by sharp-edged weapons.

Hours after the crime, Sarabjit Sigh, wearing the blue robes of the Nihang order, claimed that he had "punished" the victim for "desecrating" a Sikh holy book.

“He was a god-fearing man who could not never think of desecrating a holy book... Whenever he used to go to a Gurdwara, he would pray for the well-being of his family and the society,” said Jaspreet Kaur.

He had no criminal record and there was no report of him being a bad character, the victim's family said and demanded a high-level probe into the entire episode to bring out the truth.

Jaspreet and Raj Kaur said even if it is assumed for a moment that Lakhbir had done something wrong, those who killed him in such a barbaric manner should have given him time to prove his innocence, or they could have handed him over to the police.

“At no stage could they be the deciding authority while running their own self-styled court which pronounced punishment and then murdered him inhumanly. Where does the law of land prevail here?” said his grieving sister.

His wife Jaspreet Kaur and three daughters aged 12, 11 and eight years live in a small temporary house made of mud and bricks in village Cheema Kalan, around 50 km away from the holy city of Amritsar. His son passed away two years ago.

The family was barely managing two square meals a day when Lakhbir was alive and would work in the village fields or in the grain market of Tarn Taran district for his livelihood.

“Who will come forward to look after his family now and what about the future of his children..who will help them,” lamented his sister Raj Kaur.

Sonipat's Deputy Superintendent of Police Virender Singh said the total number of accused in the crime could be more than five.

“We produced Sarabjit before the court. The accused has been remanded in seven days' police custody by the court,” he said over the phone.

“The accused has pointed to the involvement of four more people in the case and taken their names...we are conducting further investigations in this regard. We have to make some recoveries from the arrested accused including the weapon used in the crime and the clothes he was wearing,” he said.

Earlier on Friday, in a video clip that surfaced on social media, some Nihangs were seen standing around the victim with his severed left hand close to his head. The group was heard accusing him of desecrating a Sikh holy book.

A case of murder was registered at the Kundli police station in Sonipat in connection with the lynching incident.

Around 15 Dalit outfits submitted a memorandum to the National Commission for Scheduled Caste Chairman Vijay Sampla on Saturday demanding stringent action against the culprits.

Political parties across the board have condemned the incident and demanded a thorough probe.

Bahujan Samaj Party (BSP) chief Mayawati on Saturday said that the incident was extremely sad and shameful and demanded that the victim's family be given compensation.

"The brutal murder of a Dalit youth from Punjab at Delhi's Singhu border is extremely sad and shameful. The police must take the incident seriously and take strong action against the accused persons.

"The BSP demands that the Dalit chief minister of Punjab should give a financial assistance of Rs 50 lakh and a government job to the aggrieved family, as was done in the Lakhimpur Kheri incident," Mayawati said in a tweet in Hindi.

The Congress had said that it was the government's responsibility to investigate the lynching, while the BJP asserted that anarchic elements are using farmers for their politics.

The saffron party on Saturday hit out at the opposition party for not raising the issue at the Congress Working Committee meeting.

BJP spokesperson Gaurav Bhatia questioned if the opposition party stood with the "Talibani mindset" behind the killing.

"For the sake of petty and cheap vote bank politics, opposition parties, especially the Congress, will maintain a deafening silence on this key issue.

"They will not have the courage to call spade a spade because it does not suit their political narrative," Bhatia said while also attacking farmer leader Rakesh Tikait for his reported remarks that organisers cannot be blamed for such an incident.

The Samyukta Kisan Morcha, an umbrella body of farmer unions that is spearheading the protests, issued a statement on Friday distancing itself from the incident and said that it wanted to make it clear that "both the parties to the incident", the Nihang group and the victim, have no relation with the Morcha.

Bharatiya Kisan Union (BKU), which is leading the charge at Ghazipur on the Delhi-Uttar Pradesh border, said on Saturday that more cameras would be installed and there shall be a change in the deployment of volunteers at the protest site in the wake of the Friday incident.

"It has been decided now that such volunteers shall be deployed only by SKM at protest sites," BKU’s media in-charge Dharmendra Malik told PTI.

It was also decided that the groups or individuals who are participating in the movement but hold ideologies that are different from the SKM's policies shall be asked to vacate the protest sites or adopt the agendas of the farmers' collective, he added.

Harinder Singh Lakhowal, general secretary of BKU (Lakhowal), alleged that the incident was a ploy to divert attention from the Lakhimpur Kheri incident.

"It's the government's tactics hoping that incidents like this will weaken the movement, that ultimately it will disperse, but it is not going to happen. We will only grow stronger. Our core value is of non-violence," farmer leader Kavitha Kuruganti of the Mahila Kisan Adhikar Manch said.

Hundreds of farmers, mostly from Punjab, Haryana and UP, have been camping at the Delhi borders since November 26 last year, demanding the repeal of the three new farm laws.

While the agitating unions have been expressing fear that the laws would do away with the Minimum Support Price system, leaving farmers at the mercy of the corporations, the government has been projecting them as major agricultural reforms.

Over 10 rounds of talks between the two sides have failed to break the deadlock.

The Supreme Court had stayed the implementation of the laws in January.