The Indian side at the virtual talks was led by Naveen Srivastava, additional secretary of the East Asia Division of the MEA. India is insisting that both armies move back to positions they occupied at the end of April 2020 in eastern Ladakh. 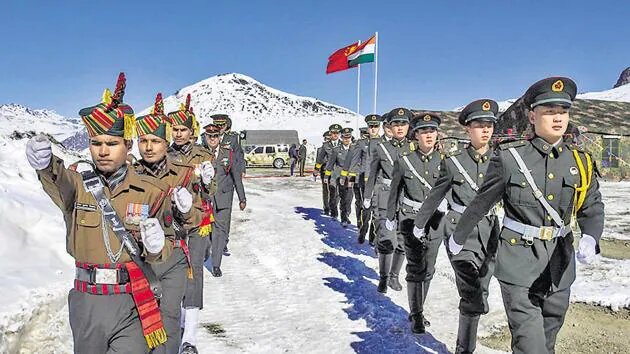 Diplomats from India and China wrapped up another round of talks on keeping the peace along the Line of Actual Control (LAC), even as complete withdrawal of troops from certain sections of the border remained at a standstill. Last summer’s military confrontation between India and China in Ladakh had escalated tension between Asia’s two major powers. Tension continues to simmer over the pull out, with the last round of military commander level talks on October 10, achieving nothing more than angry exchanges between the two sides.

However the statements issued after Thursday’s talks were not acrimonious, possibly because diplomats and not soldiers were involved. Whether the talks will lead to an early drawdown of troops remain to be seen. India is insisting that both armies move back to positions they occupied at the end of April 2020 in eastern Ladakh. Though pull out has happened in some areas there are differences over a few of the remaining points, leading to the long stand-off.

The one saving grace is that India and China have continued to talk to each other despite the military confrontation though that has not led to a quick resolution of the problem. This indicates that neither side want to escalate the situation further.

The Indian side at the virtual talks was led by Naveen Srivastava, additional secretary of the East Asia Division of the MEA, while Hong Liang, director-general in the department of boundary and Ocean Affairs spoke for China. Though there was no joint statement both releases were on similar lines.

This was the 23rd meeting of the Working Mechanism for Consultations and Coordination on India-China border affairs (WMCC). This was set up in January 2012, to ensure that peace and tranquillity along the LAC was maintained and disputes arising from unintended cross overs by soldiers were quickly resolved. The WMCC was to be in place till the boundary question was resolved amicably by both sides. Despite the agreement the PLA had often crossed the LAC and pushed into Indian territory.

The bland statements by India and China give little indication of what actually happened. But both sides referred to the political guidelines set by their respective foreign minister’s – Subramanayam Jaishankar and Wang Yi, and their conversation when they met again in Dushanbe in September-- to continue diplomatic and military talks to resolve the remaining issues in the eastern Ladakh sector of the LAC.

"Accordingly, the two sides had candid and in-depth discussions on the situation along the LAC in Western Sector of India-China Border Areas and also reviewed the developments since the last meeting of the Senior Commanders of both sides which was held on 10th October 2021. In this regard, they agreed on the need to find an early resolution to the remaining issues along the LAC in Eastern Ladakh while fully abiding by bilateral agreements and protocols so as to restore peace and tranquillity. The two sides also agreed that both sides should in the interim also continue to ensure a stable ground situation and avoid any untoward incident,’’ the MEA said in a statement, after the meeting..

China issued a statement on similar lines : "The two sides had a candid and in-depth exchange of views on the recent developments in the China-India border areas, and agreed to consolidate the existing outcomes of the disengagement, strictly abide by the agreements and protocols and the consensus reached between the two sides, prevent the situation on the ground from relapsing.’’

Though expectations of a quick resolution of the troop withdrawal from Hot Springs and persisting patrolling issues at the Depsang Plains near the strategic OLD point, remain and seem difficult to resolve. Yet on paper at least both sides are committed to moving forward with the attempt to settle issues peacefully. Another round of military commander’s talks is in the offing though dates have not yet been announced.