The Army chief said India has been continuously engaging with China both at the military and diplomatic levels to resolve the border dispute. 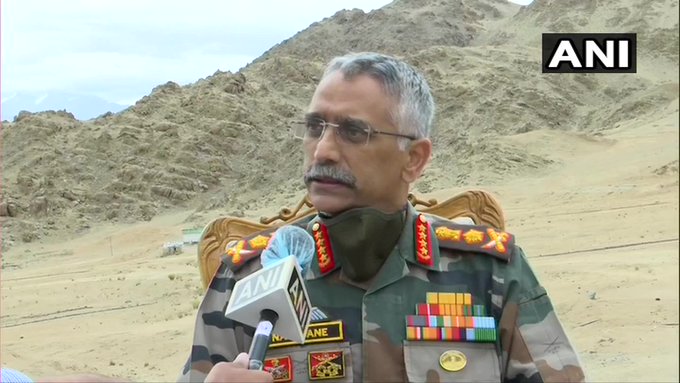 Army Chief Gen MM Naravane, who is on a two-day visit to Ladakh, said on Friday that the situation along Line of Actual Control is "slightly tense" and the Army has been deployed as a precautionary measure.

Tensions flared up in eastern Ladakh after China unsuccessfully attempted to occupy Indian territory in the southern bank of Pangong lake four days back when the two sides were engaged in diplomatic and military talks to resolve the festering border row.

On the first day of his two-day visit to Ladakh on Thursday, Gen Naravane held a series of meetings with top commanders about the evolving situation in the region as well as on India's overall combat readiness to deal with any eventualities.

"The situation along LAC is slightly tense. Keeping in view the situation, we have taken precautionary deployment for our own safety and security, so that our security and integrity remain safeguarded," the Army Chief said.

He said the situation has been tense for the last 2-3 months,  but they have been continuously engaging with China both at the military and diplomatic levels to resolve the dispute. “These engagements are ongoing and will continue in the future also,” Gen Naravane said.

He said he visited different places after reaching Leh. “I talked to officers, JCOs and took stock of preparedness. The morale of jawans is high and they are ready to deal with all challenges. I would like to reiterate that our officers and men are the finest in the world and will make not only the Army but also the nation proud,” the Army Chief said.

India occupied a number of strategic heights on the southern bank of Pangong lake and strengthened its presence in Finger 2 and Finger 3 areas in the region to thwart any Chinese actions. China has strongly objected to India's move. But India has maintained that the heights are on its side of the LAC, according to government sources.

On Monday, the Indian Army said the Chinese military carried out "provocative military movements" to "unilaterally" change the status quo on the southern bank of Pangong lake on the intervening night of August 29 and 30 but the attempt was thwarted by the Indian troops.