Prime Minister Narendra Modi told Arvind Kejriwal that live telecasting the meeting is not appropriate and that they should always maintain restraint. 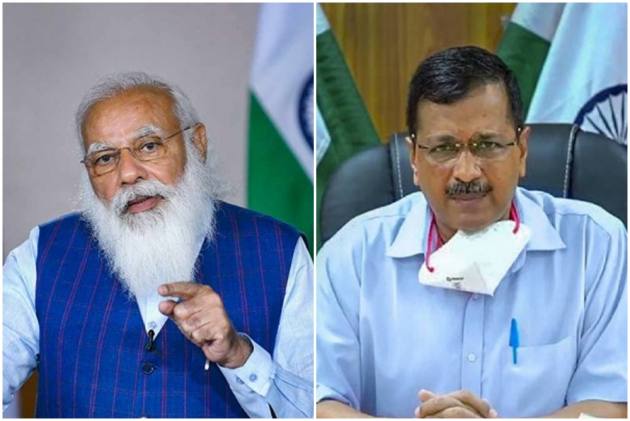 Prime Minister Narendra Modi met with the Chief Ministers of the 10 worst-hit states on a day India touched a new record of 3.32 lakh Covid cases and 2,263 deaths in 24 hours. In live interaction, Delhi Chief Minister Arvind Kejriwal highlighted the crippling oxygen crisis in hospitals in the capital.

During the meeting, CM Kejriwal asked, “Will the people of Delhi not get oxygen if there is no oxygen-producing plant here?”

The suggestions made by Kejriwal were shared in a live telecast from the meeting. However, he was interrupted by the prime minister who said, “this is strictly against our protocol... that some Chief Minister is showing a live telecast of an in-house meeting," said the Prime Minister sternly.

PM Modi told Kejriwal that live telecasting of the meeting is not appropriate and that they should always maintain restraint.

The Chief Minister's office later shared a statement saying, "the CM address was shared live because there has never been any instruction, written or verbal, from central govt that the said interaction could not be shared live. There have been multiple occasions of similar interactions where matters of public importance which had no confidential information were shared live. However, if any inconvenience was caused we highly regret that".

"He raised the point of airlifting oxygen but did not know that it is already being done. He spoke about the 'Oxygen Express' but Railway sources say he has not communicated anything about it to them".

"He chose to spread lies on vaccine prices despite knowing that the Centre does not keep one vaccine dose with itself and shares with states only. All CMs spoke about what they are doing to improve the situation. However, Kejriwal had nothing to speak on what he is doing," a source said.

Raising alarm that a "big tragedy" may happen due to oxygen shortage in hospitals during the second wave of the COVID-19 pandemic, Delhi Chief Minister Arvind Kejriwal on Friday said the Centre should take over all oxygen plants through the Army.

At the meeting chaired by Prime Minister Narendra Modi on the COVID-19 situation, Kejriwal requested him to direct chief ministers of all states to ensure smooth movement of oxygen tankers coming to the national capital.

"People in major pain due to oxygen shortage. We fear a big tragedy may happen due to oxygen shortage and we will never be able to forgive ourselves. Despite being a CM, I am not able to help the people of Delhi. I request you with folded hands to direct all CMs to ensure smooth movement of oxygen tankers coming to Delhi," he said during the meeting.

"We need a national plan to deal with the crisis. Central government should take over all oxygen plants through the Army and every tanker coming out of the oxygen plant should be accompanied by an Army escort vehicle," he said.

"We are thankful to the Central government that they increased our quota of oxygen but we have been trying since two days to get the oxygen supply. The oxygen supply scheduled to come to Delhi from Odisha and West Bengal should either be airlifted or brought through the 'Oxygen express' started by the Centre," he said.

The chief minister also objected to different rates being charged from state governments and the Centre for the COVID-19 vaccine, and said "one nation, one rate" policy should be followed.

"In a single country, why are we having two prices for the same thing. There should be one nation, one rate policy. The entire country should get vaccine at a similar rate. Every one in the country should be entitled to vaccine, medicines and oxygen, without any dispute," he said.

The hospitals in the national capital have been sending out SOS messages about the escalating "oxygen emergency". Twenty-five of Sir Ganga Ram Hospital’s "sickest" COVID-19 patients died in 24 hours and the lives of 60 more hung in precarious balance, officials said on Friday morning as the scramble for oxygen got increasingly more frantic in hospitals across the national capital.

After the unprecedented crisis of the morning, an oxygen tanker did reach Ganga Ram in central Delhi at 9.20 am but it was enough to last up to about five hours depending on consumption, an official at Ganga Ram said.

Outside the hospitals, too, despair escalated. Ambulances could be seen lined up, patients waited on stretchers, some visibly gasping for breath, and family members and friends desperately tried to get their loved ones a bed. But that was a tough task.

On Thursday, Delhi recorded 306 COVID-19 deaths and 26,169 cases with a positivity rate of 36.24 per cent, the highest since the pandemic began a year ago. City hospitals grappled with depleting oxygen supply and, stretched to their limits, some requested the Delhi government to transfer patients to other healthcare facilities.

While some hospitals have managed to make short-term arrangements, there is no immediate end to the crisis in sight, a government official had said on Thursday.