A car was set afire in Delhi's Daryaganj and protesters hurled stones at security personnel near Delhi Gate. 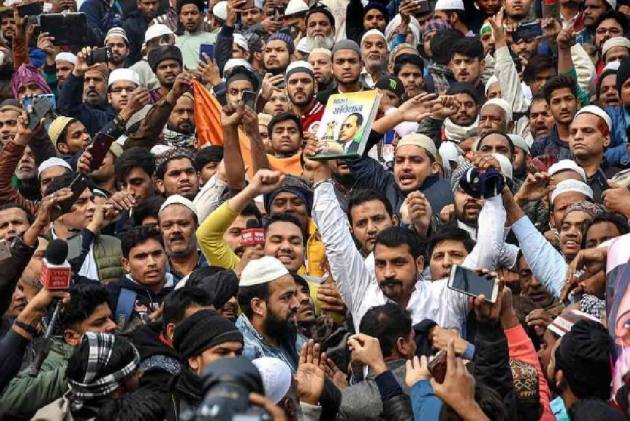 At least six persons died as violent clashes with police rocked Uttar Pradesh on Friday while thousands rallied in the national capital and several other cities with tricolour and 'Save Constitution' banners as part of raging protests across states against the Citizenship Amendment Act and the proposed NRC, prompting the government to indicate it was ready to accept suggestions.

A car was set on fire in Delhi's Daryaganj area and protesters hurled stones at security personnel near Delhi Gate, while police used water cannons and lathi-charged a large group of protesters to disperse the crowd.

Sporadic violence was reported from other parts of Delhi, Maharashtra and Karnataka-Kerala border areas as well, while authorities resorted to curbs on mobile internet and SMS services in various regions, including in parts of UP, Karnataka and the national capital. Some groups, however, offered roses to the police to underline peaceful nature of their protest.

Heavy security was deployed in all sensitive areas, including those where large-scale protests took place on Thursday that saw at least three deaths including of two persons in police firing in Mangaluru. One person had died in Lucknow.

Taking the nationwide toll to at least nine in two days, six persons were killed during protests at various places in Uttar Pradesh, where police retaliated with tear gas shells and rubber bullets after protests turned violent.

Director General of Police O P Singh told PTI that two people lost their lives in Bijnor and one each in Meerut, Sambhal and Firozabad. But officials reported a death in Kanpur as well. He said over 50 policemen were seriously injured.

The raging protests also saw some allies of the ruling BJP voicing their concerns. Bihar Chief Minister and JD(U) leader Nitish Kumar asserted the NRC will not be implemented in his state, while another BJP ally Lok Janshakti Party's president Chirag Paswan said the protests show the central government has "failed" to dispel confusion among a significant section of society.

Holding a protest march in Maharashtra, the All India Majlis-e-Ittehad-ul-Muslimeen (AIMIM) alleged the Narendra Modi government wants to ensure only Hindus remain in India with its twin move of the new Citizenship (Amendment) Act and the proposed countrywide National Register of Citizens (NRC).

Congress chief Sonia Gandhi said the Modi government has shown utter disregard for people's voices and used brute force to suppress dissent. She said the CAA was discriminatory and the proposed NRC will particularly hurt poor and vulnerable.

A top official, however, said the government is ready to accept suggestions, if any, from the people who are staging protests and asserted that various efforts were being made to clear doubts of the people about the new law.

The national capital remained heavily barricaded but prohibitory orders and closure of several metro stations could not stop thousands from rallying near Jama Masjid area, soon after Friday afternoon prayers. As the day drew to a close, the protesters gathered at India Gate and Central Park, while carrying tricolour and 'Save Constitution' banners and also raising slogans against what they called attempts to divide the country on religious lines.

Bhim Army chief Chandrashekhar Azad led one of the largest protests, despite being denied permission to hold a march. Giving police the slip, he raised slogans and read out the preamble of Indian Constitution. Later in the evening, he sat on a protest near Jama Masjid.

The police was seen using drones to keep a vigil, while Delhi Metro gates were closed at some stations, including in the Old Delhi areas.

Police also carried out a flag march in the north-east district which had witnessed violence on Sunday during continuing protests against the amended law, which seeks to grant speedier citizenship only to non-Muslims facing religious persecution in Pakistan, Bangladesh and Afghanistan.

Delhi Mahila Congress chief and former president Pranab Mukherjee's daughter Sharmistha and some other members of the party were detained near Home Minister Amit Shah's residence during a protest against the new legislation.

Near Jamia Millia Islamia, which had seen massive police crackdown on students on Sunday, hundreds of people were seen wearing white caps with "No CAA No NRC" written on them.

However, it was Uttar Pradesh that saw violent clashes breaking out at multiple places, including in Gorakhpur, Sambhal, Bhadohi, Bahraich, Farrukhabad, Bulandshahr and Firozabad, soon after Friday prayers as protesters hurled stones, torched vehicles and faced police action.

In Gujarat, a mob pelted stones at the police outside a mosque in communally sensitive Hathikhana area of Vadodara city, objecting to video-shooting of namaz congregation, which the officials said was being done as a preventive measure in the wake of anti-CAA protests. Three persons were arrested while a senior official was injured in stone-pelting, the police said.

In Maharastra, mobs pelted stones at state transport buses in Beed, Nanded and Parbhani districts, while over 10,000 took part in a protest march in Pune.

In Kerala, police kept high vigil in northern districts in the wake of the killing of two persons in Mangaluru in neighbouring Karnataka. A series of protest marches and blocking of trains and buses took place in various parts of Kerala past midnight after the news emerged about the deaths.

A large number of Congress workers blocked roads and burnt tyres in Kozhikode, while a group of activists also burnt an effigy of Home Minister Amit Shah.

Karnataka police, on the other hand, restricted entry to Mangaluru for those coming from Kerala. At least 50 men and women who had arrived by a train from Kerala were taken into custody for trying to enter the city without identity cards.

Some media persons were detained for entering the Government Wenlock hospital where the post-mortem of those killed in the police firing was underway. The journalists, who were from Kerala, were released later in the day.

Police sources said protesters defying prohibitory orders attempted to lay siege to a police station in Mangaluru and tried to attack police personnel, following which force was used to disperse them.

Chief Minister B S Yediyurappa appealed to people to stay away from 'vested interests' indulging in rumour-mongering and assured his government's commitment to protecting the rights of all citizens.

However, mobile internet service resumed in Assam on court orders, ten days after it was banned during protests against the new law.

Assam Chief Minister Sarbananda Sonowal said he will talk to leaders of anti- citizenship law agitation and his government was committed to safeguard the rights and honour of the state's indigenous population.