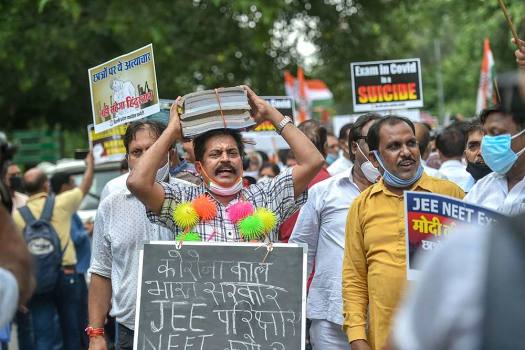 Ministers of six non-BJP ruled states on Friday moved the Supreme Court against its order allowing holding of NEET and JEE exams amid the COVID pandemic, as the row over the contentious issues intensified with the top Congress leadership stepping up its offensive against the government, while Union education minister Ramesh Pokhriyal Nishank asserted that politics should be kept away from education.

National Testing Agency (NTA), which conducts medical and engineering entrance exams --National Eligibility-cum-Entrance Test and the Joint Entrance Examination, has decided to hold NEET on September 13 and JEE Mains for under-graduate Engineering Colleges and Institutes from September 1 to 6.

With barely days left for the JEE exams to start, the issue has escalated into a full blown political battle with the ministers from six states -- Rajasthan and Punjab (Congress), West Bengal (Trinamool Congress), Jharkhand (Jharkhand Mukti Morcha), Maharashtra (Nationalist Congress Party and Shiv Sena) -- seeking postponement of the exams "in a manner that achieves the twin objectives of ensuring that the academic year of the students is not wasted and their health and safety is not compromised.

However, chief ministers in BJP-ruled Madhya Pradesh (Shivraj Singh Chouhan) and Uttar Pradesh (Yogi Adityanath) backed holding of these exams as per schedule.

In an order on August 17, the top court had dismissed a plea seeking postponement of tests for NEET and JEE, scheduled to be held in September, saying that "life cannot be stopped" and the "career of students cannot be put in jeopardy."

In its review petition, the parties said the August 17 order is "cryptic, non-speaking" and does not discuss various aspects and complexities involved in a matter of this magnitude.

The plea said that only two reasons given by the court - life must go on and students should not lose an academic year - do not constitute an authoritative and comprehensive judicial scrutiny of the issue.

"It is submitted that if the impugned order dated August 17, 2020 is not reviewed then grave and irreparable harm and injury would befall on the student community of our country and not only will the health, welfare and safety of the students/candidates appearing for the NEET/JEE examinations would stand imperilled but also the public health at large would be in severe jeopardy in these COVID-19 pandemic times," the plea said.

The Congress stepped up its efforts seeking deferment of the exams with day-long campaign of holding nationwide protests and voicing opposition on social media against the conduct of NEET and JEE amid the pandemic and floods in some states.

Congress president Sonia Gandhi and former party chief Rahul Gandhi urged the government to listen to the voices of students on the issue of conducting NEET and JEE and act according to their wishes.

If any decision has to be taken regarding students' future, it is important that it is "being taken with your concurrence", the Congress chief said in a nearly minute-long video posted on the Congress' Twitter handle with the hashtag 'Speak Up For Student Safety'.

During an online briefing by opposition parties who have moved court, Jharkhand CM Hemant Soren said that it seems the Centre is being stubborn in holding the exams while TMC leader Derek O'Brien asserted conducting examinations of this magnitude when the infection is at its peak poses serious health hazards for the students, their parents and persons conducting these exams.

Union educaion minister Nishank said politics should be kept away from education as he welcomed the Supreme Court's decision to uphold UGC guidelines on conducting final year exams for university students.

"I heartily welcome the decision taken by the Supreme Court with respect to the final year exams. Let's keep politics away from education and educate our politics," Nishank tweeted.

Meanwhile, the Indian Institute of Technology (IIT), Delhi, has appealed to its students and alumni to help those appearing for the JEE-Advanced next month with transport to reach their exam centres.

Also Read | ‘Let's Not Be Deterred By Covid’: IIT-Delhi Director On JEE-NEET

The JEE-Advanced is conducted for admissions to IITs and National Institutes of Technology. IIT-Delhi is conducting the exam on September 27. The institute has also suggested to its students and alumni to come up with a registration portal for needy candidates and help take care of their logistics.

Criticising the Centre over its decision to hold JEE-NEET exams in September, West Bengal CM Mamata Banerjee said, "We asked the Union government to defer the process due to the pandemic. But the Union government is adamant... It is busy issuing sermons instead of listening to Mann ki Baat of students."

In their plea in the top court, the ministers said the apex court order fails to satisfy the safety and security concerns of students who have to appear for the exams.

The petition, filed through advocate Sunil Fernandes, said mere fact that lakhs of students have registered for the exam is not indicative of their consent or their willingness or their desire to attend physical exams.

The submission came a day after the Union education minister asserted that lakhs of candidates have downloaded admit cards which show that students want these exams to be "conducted at any cost."

The petition said that as per the NTA press release, approximately 9.53 lakhs and 15.97 lakhs students have been registered for JEE (Main) and NEET (UG) 2020, respectively.

"Such large movement of people will ipso facto prove to be a serious health hazard and will totally defeat the twin present-day solutions we have of combating the COVID-19 pandemic i.e. social distancing and avoidance of large public gatherings," it said.

Many students have also taken to Twitter to express their concern over holding of JEE and NEET during the COVID-19 pandemic. The hashtag 'speakupforstudentsafety' has been trending since Friday morning with at least 2.25 million posts on the microblogging site.