Sixth Round Of Centre-Farmers Talks Begin 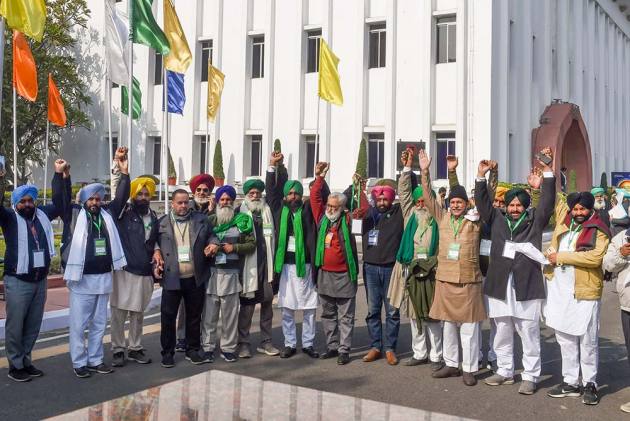 Three union ministers met a 41-member representative group of thousands of farmers protesting against three farm laws on borders of the national capital for the sixth round of negotiations on Wednesday to break the over one-month-long deadlock on the contentious issue.

While the government hoped it would be a decisive meeting and the protesting farmers would return from Delhi borders to their respective homes to celebrate the New Year, farmer leaders insisted they are prepared to continue their agitation till the government agrees to their demands, including repeal of the laws.

After around two hours of discussions, the union ministers joined farm leaders to share 'langar' food arranged by protesting farmers.

Talks Must Only Focus On Repealing New Laws: Farmers To Centre

The Hour Of Reckoning: Adamant Farmers Meet A Firm Centre For Talks

The 'langar' (community kitchen) food arrived in a van at the meeting venue, Vigyan Bhawan just before the two sides took a break for tea and snacks.

Sources present at the venue said that Agriculture Minister Narendra Singh Tomar, Food and Railway Minister Piyush Goyal and Minister of State for Commerce Som Parkash joined the farmer leaders to share their langar food during the break.

Farmer leaders said that the talks were continuing and they were going 'agenda wise'.

While talks resumed after the break, some leaders said not much headway was made in the first session, sources said.

Before the meeting, Parkash, himself an MP from Punjab, said he was hopeful that it would be a decisive meeting and the government wanted the protesting farmers to return to their respective homes to celebrate the new year.

Previously, Tomar had also said he was hopeful that a solution would emerge before the year 2020 ends.

Some union leaders, however, said that farmers in some parts of the country are being forced to sell crops including paddy below the Minimum Support Price as market rates have fallen and asserted that the agitation will continue till the government agrees to their demands.

"After new farm laws were implemented in Uttar Pradesh, prices of crops have fallen by 50 per cent. Crops are being bought at below MSP. Paddy is being sold at Rs 800 per quintal. We will raise these issues in the meeting," Bharatiya Kisan Union (BKU) leader Rakesh Tikait told reporters before entering the meeting venue.

"We will not leave Delhi till our demands are met. We will celebrate New year at borders" he said.

Punjab farmer leader Baldev Singh Sirsa came for the meeting carrying placards of media reports of fraudulent cases reported in Guna and Hosangabad after implementation of the new laws.

"We don't have any new agenda. The government is maligning us by saying farmers are not coming for talks. So we gave December 29 date for talks. We have given them our clear agenda but the government is insisting that laws are beneficial for farmers," Sirsa said.

Showing media reports, he said more fraudulent cases are being reported after the implementation of the new laws and these issues will be raised in the meeting.

The meeting between three union ministers and representatives of 41 farmer groups began at around 2.30 pm at Vigyan Bhawan.

Tomar is heading the government side, which also included Goyal and Parkash, who is an MP from Punjab.

The protesting farmer unions are sticking to their position that the discussions will only be on the modalities of repealing the three new agri laws and giving a legal guarantee on the MSP among other issues.

On Monday, the Centre invited the unions for the next round of talks on December 30 on all relevant issues to find a "logical solution" with an "open mind" to the prolonged impasse over the three new agri laws that were enacted in September.

But in its letter on Tuesday, the Samyukt Kisan Morcha, the umbrella organisation which represents the farmer unions, said the modalities for repealing the three contentious laws and a legal guarantee on minimum support price (MSP) must be part of the agenda.

The sixth round of talks was originally scheduled for December 9 but it was called off after an informal meeting of Home Minister Shah with some union leaders failed to reach any breakthrough.

The government had, however, followed up Shah's meeting with a draft proposal sent to these farmer unions in which it had suggested 7-8 amendments to the new laws and written assurance on the MSP procurement system. The government has ruled out a repeal of the three agri laws.

Thousands of farmers, mainly from Punjab and Haryana, are protesting at various borders of the national capital for more than a month against these three new laws.

The government has presented these laws as major agriculture reforms aimed at helping farmers and increasing their income, but the protesting unions fear that the new legislations have left them at the mercy of big corporates by weakening the MSP and mandi systems.