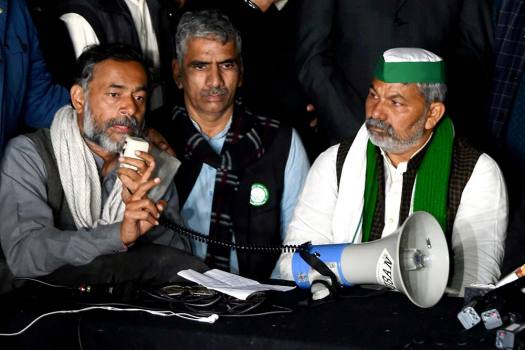 The Samyukt Kisan Morcha has urged people to pressurise the MLAs of the BJP-JJP alliance to vote in favour of the no-confidence motion against the Haryana government in the state assembly on March 10.

The appeal came in the wake of Congress planning to move a no-confidence motion against the BJP-JJP government on Wednesday.

In a video appeal to Haryana farmers and state residents, Dr Darshan Pal, a senior farmer leader from Punjab and a key member of the Samyukt Kisan Morcha (SKM), on Sunday said farmers and other residents should approach the BJP, JJP legislators in their homes and offices.

"You should especially put pressure on the BJP-JJP legislators because the Centre is not agreeing to farmers' demands and for over a month, they have been silent,” he said, adding that a no-confidence motion is being brought against the Haryana government in the state assembly on March 10.

“We will be sending a letter which you should carry and tell these legislators that they should vote in favour of the no-confidence motion so that the Khattar government comes to know that people stand with this agitation and the government which opposes it will be taught a lesson and that on March 10, they will play their role in bringing down this government,” said Pal.

Meanwhile, when asked to comment on the SKM's move, Haryana's Deputy Chief Minister Dushyant Chautala said the farmer leaders should hold a dialogue with the government to resolve the issue.

Referring to a series of “kisan mahapanchayats” held by farmers leaders in the past one month, Chautala said, “It seems their leadership is seen less on the borders (protest sites) and more on other platforms in the country.”

Claiming that "voices of dissent" are being heard among the MLAs supporting the government, Congress had last month decided to bring the motion against the state government in the Budget session of the Assembly that began on Friday.

Initially, Congress wanted to move the no-confidence on March 5, the first day of the Budget session, but its request was turned down by Speaker Gian Chand Gupta, who had fixed March 10 for it.