The 76-year-old politician has been suffering from pulmonary disease and other old age-related ailments, and is on ventilator support. 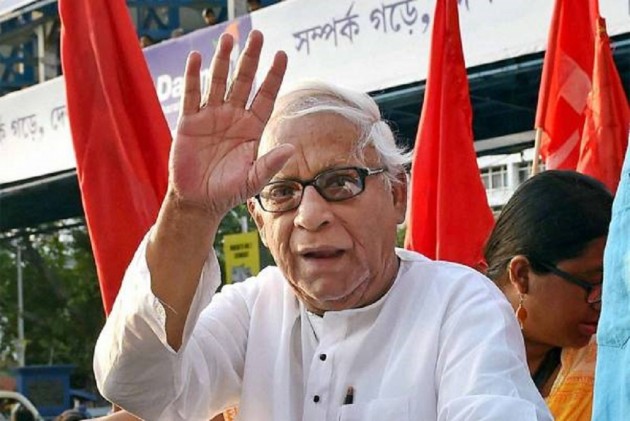 The 76-year-old politician is "still on ventilator support", they said.

"His health condition has improved a bit. He is also maintaining a steady PCO2 level and the reading of which is at 42 this morning. This is normal for COPD (chronic obstructive pulmonary disease) patients.

"He is still on mechanical ventilator support and his condition remains critical," a senior official of the hospital where he is undergoing treatment said.

His cardiac condition, pulse rate, blood pressure and oxygen saturation level are currently stable, the hospital said in a statement.

"Preliminary investigation, including blood parameters and imaging, didn't show any significant abnormality. Sedation was stopped in the morning as a trial and the patient's sensorium was assessed and found to have improved," it said.

A seven-member team of doctors reviewed the health condition of the veteran CPI(M) leader.

"He will remain on mechanical ventilation for today and the process of gradual withdrawal from the ventilator support is being planned," the statement said.

Bhattacharya was put on the mechanical ventilator support at the critical care unit of the private hospital where he was admitted on Wednesday afternoon as his breathing-related problems aggravated.

Talking about his next course of treatment, a senior doctor said that adequate nutrition and other support is being taken care of.

"As he is still on the ventilator support, the prognosis is guarded and critical. The doctors are keeping a constant vigil on his health condition and taking appropriate measures," he said.

Members of Bhattacharya's family were briefed about his health condition and CPI(M) state secretary Surjya Kanta Mishra visited the hospital during the day.

The veteran CPI(M) leader's oxygen saturation level is at around 90-95 per cent, and he has regained consciousness, the doctor said.

Bhattacharya tested negative for Covid-19 but the CT scan of his brain showed old lacunar infarcts.

The CPI(M) leader was initially put on non-invasive ventilation (BIPAP) at the hospital after which his oxygen saturation level improved to 95 per cent.

However, his condition deteriorated on Wednesday evening and he was put on mechanical ventilator support.

Bhattacharya, who was the Chief Minister of West Bengal from 2000 to 2011, has been suffering from COPD and other old age-related ailments for quite some time. He has been away from public life for the past few years due to his health.

He had stepped down from the CPI(M)'s politburo and the central committee in 2015, and gave up membership of the state secretariat in 2018.