BJP leader Smriti Irani, who arrived in Uttar Pradesh's Amethi following the death of Surendra Singh (50), said, 'My request to all party workers is that we should exercise restraint.' 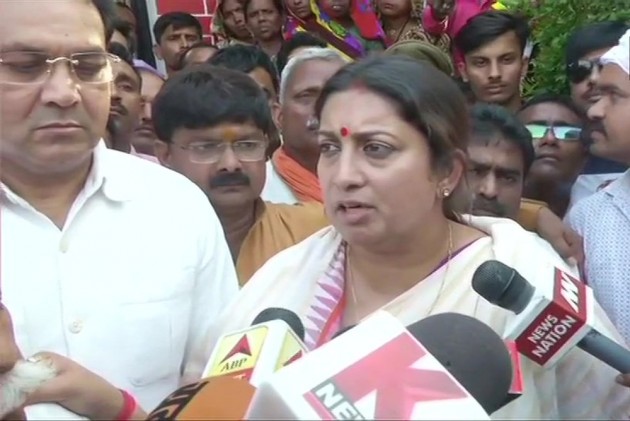 After one of her close aides was killed in Amethi, BJP MP Smriti Irani Sunday asked party workers to exercise restraint, even as she attacked Congress president Rahul Gandhi over his 'take-care-of-Amethi-with-love' remark.

Irani, who arrived in Uttar Pradesh's Amethi following the death of Surendra Singh (50), told reporters, "My request to all party workers is that we should exercise restraint."

Irani, who unseated Gandhi from his bastion when results were announced on May 23, said Singh was killed so that Amethi could be "terrorised, disintegrated and bowed down."

In the first incident of post-poll violence in Uttar Pradesh, the close aide of Irani was shot dead by two unidentified men, with police not ruling out the possibility of it being a "political murder".

"On (May) 23, I was given a message that take care of Amethi with love. To the person, who gave me the message, I would like to say that I have received the message loud and clear," she said referring to Gandhi's remarks on the counting day.

Gandhi had said, "I would like that Smriti Iraniji takes care of Amethi with love and I hope that she will reward the trust that Amethi's people have reposed in her."