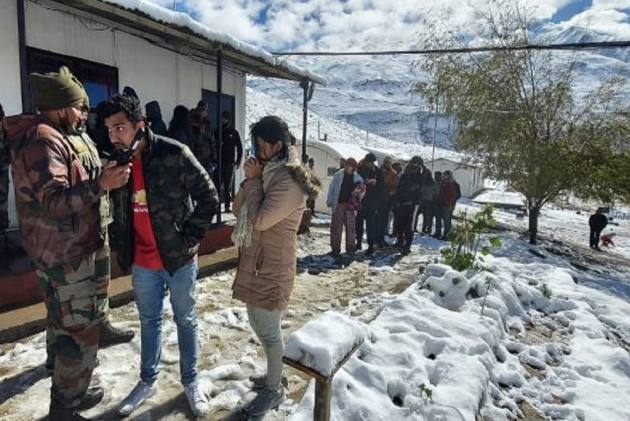 The Indian Army has rescued more than 200 tourists, who got stranded in Spiti valley following the season's first snowfall, resulting in blockade of the roads connecting Pooh with Kaza.

The tourists mainly belonged to West Bengal, Maharashtra and Delhi besides other states.

Reports said freezing cold and disruption of communication created an emergency situation for 205 tourists, who were either on their way to Kaza or returning to Pooh, to escape the snowfall miseries.

They suddenly got struck mid-way and many ran out of basic necessities like water and medicines. A few shared their horrifying experience through social media posts praising the Indian Army for saving their lives in a disaster-like situation. There have been continuous snowfall in the past 48 hours paralysing normal life.

While the tourists were apprehensive about spending a night under the open sky in the freezing cold, the Indian army quickly got into action and launched a massive operation to bring the tourists back to their camps before the night.

A team of the Dogra scouts of the Indian Army led by Col. Nitin Mittal helped the tourists to return to the camps, where they provided heating and also served eatables. Some tourists facing oxygen shortage and other complications were also provided emergency medical help.

The tourists were also helped by the Indian army men to talk to their families back home and inform them about their well-being; there was no telephone connectivity available to them on the way.

“We were a group of eight research scholars and it had become really tough even to go back to a place where they can get relief from the freezing cold. Thanks to the Indian Army ,which gave us a ray of hope for safety and return to home,” said a woman from West Bengal .

Though the MeT department had issued a warning about the chances of snow in the higher reaches, the tourists in their enthusiasm have been taking risks and venturing to the high altitude areas of Himachal Pradesh.

Sub-Divisional Magistrate (Kaza) Mohinder Pratap Singh has issued a fresh appeal to the tourists not to move or try to hit the road before the snow clearance work is done and they are given green signal.

In a heartwarming video message, famous playback singer Kailash Kher has commended the efforts of the youths in Spiti valley for helping the stranded tourists.

Kher said it was really amazing to note how the youths volunteered themselves to reach out to the tourists facing problems after snowfall in Spiti valley.

“It's the true sense of Devbhumi as Himachal Pradesh is known. This is also a strong message to the world about rich Indian values and cultures on a pious soil i.e. Bharatvasrh,'' he said.

After the season's first snowfall in Lahaul-Spiti , temperature took a  nose dip at Keylong to minus 1.3 degrees,which was below two degrees than normal temperature .

Rohtang Pass (13,050 ft) and  Kunzum pass (14,931 ft) have experienced heavy snow and are totally wrapped in a thick blanket of fresh snowfall.

He said that rain and snowfall disrupted vehicular traffic in many places. Manali- Keylong and Manali Leh road have been snowbound since the last 24 hours due to the mounting of two feet snowfall likely to be clear today however the highway was closed yesterday.

Snowfall has also created havoc in Kinnaur, where apple orchards have suffered a huge loss. The snowfall led to uprooting and smashing of the apple plants even as harvesting season was underway.