So Near And Yet So Far, 21-day Quarantine Awaits Bihar Migrants Upon Homecoming

The government says all the migrants are being taken to the block headquarters of their native places where they will have to stay put at quarantine centres for a minimum of three weeks. 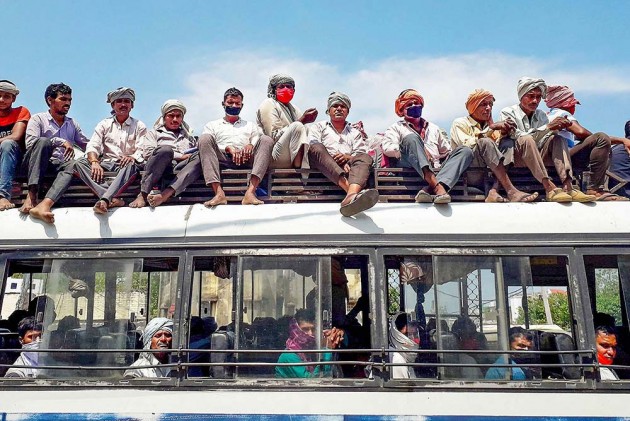 Thousands of jobless Bihari migrants returning home by trains after being left to fend for themselves during the lockdown will not be able to meet their families immediately upon their arrival in their home state. They will all have to spend a minimum of three weeks at the quarantine centres set up by the state government before they will be able to meet their kith and kin in their village.

Wary of a possible spike in the number of COVID-19 cases in the wake of migrant workers’ arrival from places as far as Kerala, Chief Minister Nitish Kumar has also chosen to convert 13 districts from ‘green zones’ to ‘orange zones’. The entire state, except five districts in the ‘red zone’, is at present under orange zone. Bihar has witnessed 503 positive cases out of which four have died so far.

As of May 4, altogether four trains – Kota to Barauni, Kota to Gaya, Ernakulam to Danapur, Thiroor to Danapur – packed with students and migrants are reaching Bihar. Two trains from Bengaluru will also reach Danapur on May 5. In the next few days, more trains are set to run from Kota to bring back students from there.

Opinion | The Hunger Of Migrant Workers Is Our National Shame

As per a conservative estimate, at least 12,000 students enrolled at different medical and engineering coaching institutes have been stranded there.

On May 2, the first train carrying 1,174 passengers from Jaipur reached Danapur railway station on the outskirts of Patna, where they were screened on arrival before being sent away by sanitised buses to 29 districts which they hailed from.

According to Nitish, all the migrants are being taken to the block headquarters of their native places where they will have to stay put at quarantine centres for a minimum of 21 days. “All arrangements have been made for their food and stay,” he says.

“The government will not only reimburse the entire amount they might have incurred on their journey but also pay Rs 500 extra when they will leave the quarantine centres. The minimum amount to be paid to them will be Rs 1,000," he adds.

The Chief Minister says as far as return of the migrants is concerned, everything is being done in accordance with the elaborate guidelines under the central Disaster Management Act 2005. He also makes it clear that the students travelling from Kota will not have to pay anything for their journey as the state government had made paid money to the railways.

Nitish says that the state government had already transferred Rs 1,000 directly to the bank account of about 19 lakh people from Bihar who had been stranded at different places outside the state during the lockdown.

A video message of Nitish giving details of the state government's plans came on Monday to apparently counter the campaign of the opposition parties which had accused his government of doing precious little to bring back the students and migrants.

Leader of Opposition in Bihar Vidhan Sabha Tejashwi Prasad Yadav and others such as Pappu Yadav had earlier offered to bring back all stranded students back on their own, alleging that the state government was not at all willing to do so. Nitish, however, chose to hit back, claiming the government had already taken all the decisions for the welfare of those returning home during the lockdown period but refrained from publicising them. "We believe in working," he said.