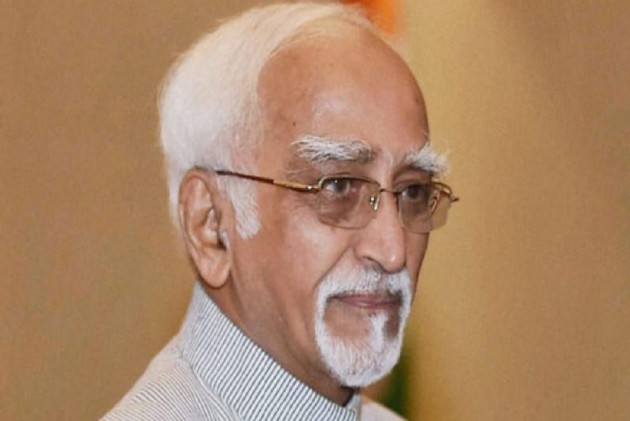 Overt and covert ideologies are seeking to segment India on imagined criteria of "us and them", former vice president Hamid Ansari said on Friday, asserting that even before Covid-19, society became a victim of two other pandemics -- religiosity and strident nationalism.

Ansari said that as against religiosity and strident nationalism, patriotism is a more positive concept as it is defensive both militarily and culturally.

Speaking at the virtual launch of senior Congress leader Shashi Tharoor's book 'The Battle of Belonging', Ansari said that in a short space of four years, India has made a long journey from its founding vision of civic nationalism to a new political imagery of cultural nationalism that appears to be firmly embedded in the public realm.

The former Vice President said that "there is a passionate plea for an ideal of India (in the book), an India that was taken for granted by our generation" and now is seemingly endangered by "overt and covert ideas and ideologies that seek to segment it on imagined criteria of us and them".

"Hitherto, our core values were summed up as an existential reality of a plural society, a democratic polity and a secular state structure. These were accepted in the freedom movement, they were incorporated in the Constitution and encapsulated in the preamble of the Constitution," said Ansari, who was Vice President from 2007-2017.

The plurality of Indian society is evident from the sociological evidence of 4,635 communities, he said, adding that every fifth Indian belongs to a recognised religious minority.

It is this diverse mass that a new ideology is seeking to homogenise supposedly on the basis of a faith premised on an "imaginary history", he said.

"The Covid-19 as a pandemic is bad enough, but before it our society became a victim of two other pandemics -- religiosity and strident nationalism. Religiosity is defined as extreme religious ardour, denoting exaggerated embodiment, involvement or zeal for certain aspects of religious activity enforced through social and even governmental pressure," he said.

Much has also been written about the perils of strident nationalism and it has been called an "ideological poison" that has no hesitation in transcending and transgressing individual rights, Ansari said.

"Records world over show that it at times takes the form of hatred as a tonic that inspires vengeance as a mass ideology. Some of it can be witnessed in our own land," he said.

Ansari asserted that patriotism is a more positive concept as it is defensive both militarily and culturally and inspires nobel sentiments, but must not be allowed to run amok.

In the book published by Aleph Book Company, Tharoor makes a stinging critique of the Hindutva doctrine and the Citizenship (Amendment) Act, which he says is a challenge to, arguably, the most fundamental aspect of Indianness.

He has asserted that Hindutva is a political doctrine and not a religious one.

Speaking at the event, Tharoor said that the BJP has spent its last six years in government contesting the idea of India by arguing that there can be an alternative idea of India.

During the discussion on the book, former Jammu and Kashmir chief minister Farooq Abdullah said, "We had the opportunity of joining Pakistan in 1947, it was my father and the others who felt that the two-nation theory is not for us."

Hindus, Muslims, Sikhs or Christians are not different as they are all human beings and thus "we chose (Mahatma) Gandhi's India, (Jawaharlal) Nehru's India, an India that belong to everyone", Abdullah said.

"That's how I felt till this government came in. They think that only a Hindu can be an Indian and all the others who are there cannot be Indians, they are second class citizens. This I am never going to accept till my dying day," he said.

"My belief is that this is for all of us, this is our motherland, we grew in it, we were educated in it, we have developed in it, our families live here, our ancestors are buried here, this is as good for me as it is for any Hindu. Today we are being divided, divided on religion, on caste on creed on language," the National Conference leader said.

"Tyrants come and tyrants go, nations continue to survive and I am confident that his nation will survive, these dividers will go," he said.

Also part of the discussion, Professor Makarand R Paranjape argued that there was not one idea of India, but many that were being hotly contested.