‘Software In A Week, Hardware In A Year’: Magsaysay Awardee Sonam Wangchuk Calls For 'Boycott Made In China'

Wangchuk said he was calling for 'boycott made in China movement' in response to Chinese aggression along Line of Actual Control in Ladakh region. 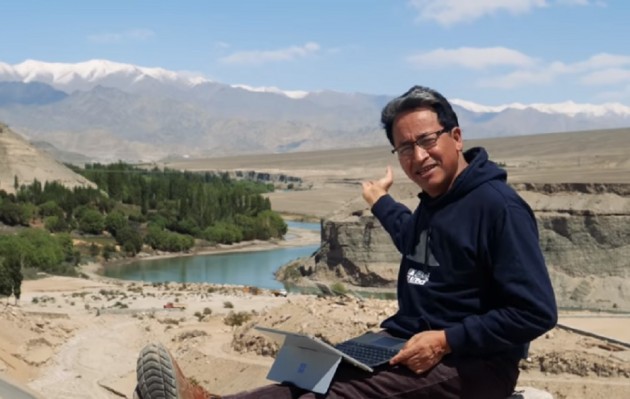 Noted innovator and Ramon Magsaysay and Rolex Awards winner Sonam Wangchuk on Saturday appealed to people to boycott everything “made in China” saying that it will have resonance around the world in the present situation due to the Covid-19 pandemic.

He said he was calling for “boycott made in China movement” in response to Chinese aggression along Line of Actual Control in Ladakh region.

“within one week I am getting rid of my phone, which is made in China, and in one year I will throw out of my life anything that is made in China," Sonam Wangchuk said in a video urging people to spread his message. “Boycott made in China, software in a week and hardware in a year,” he said.

Set in Leh with the Himalayas and river Sindhu in the backdrop, Wangchuk sits on a stone in his video message. Pointing towards mountains he says beyond these mountains are areas of Nobra and Changthan where tension prevails. “Thousands of soldiers have been taken over there. I have heard China has placed Airforce jets there. And an hour ago Indian Airforce jets were hovering over me,” he says.

USE YOUR WALLET POWER#BoycottMadeInChina #SoftwareInAWeekHardwareInAYear to stop Chinese bullying in Ladakh & eventually to liberate the 1.4 Bn bonded labourers in China, as also the 10 Mn Uighur Muslims & 6 Mn Tibetan Buddhists.
Click this link to playhttps://t.co/ICjRQJ2Umf pic.twitter.com/lpzAXxARPj

“Normally when there is tension on the borders, we people take sound sleep with notion that soldiers on the border would respond to it. This time we want along with a soldier’s response there should be people’s response to the aggression as well,” he says. “What would people like you sitting in Delhi, Mumbai and other cities would do in such a situation? To understand this, you have to understand why China is doing it,” the Magsaysay award winner innovator adds.

“For past few weeks, China is aggressive in the South China Sea and is creating issues with Vietnam, Taiwan and even Hong Kong. I understand China was doing it to solve its internal issue. China today fears its own people, whom Chinese government treats like bounded labourers,” he says, adding China fears revolution within from its angry citizens.

“That is why China wants enmity with its neighbours to keep people under control,” Wangchuk adds.

He says at this time, compared to India’s bullet power, wallet power would help a lot.

“We buy 5 lakh crore goods from China every year and it is this money that is used to buy weapons by China, which is used against our soldiers. If Indians in India and abroad start a boycott made in China movement, maybe the World will join it given anger against China over the Covid-19."

He further added that such a move will have impact on Chinese economy and would anger its people and they might overthrow the government there.

“If we will not be part of this movement to boycott made in China it would be tragedy for us. On one hand, our army is fighting China and on the other hand, we, you and me, are buying Chinese goods and thus sending money to Chinses army”, he said. He said on the software front people in India are on TikTok and other Chinese apps sending crores of money to China. “That is why the boycott made in China movement will bring self-reliance to us."