Prime Minister Narendra Modi on Saturday asked the people of Arunachal Pradesh to vote for a 'chowkidaar' who would provide security to the country even as he attacked Opposition parties, saying they were "disheartened" by India's growth and success. 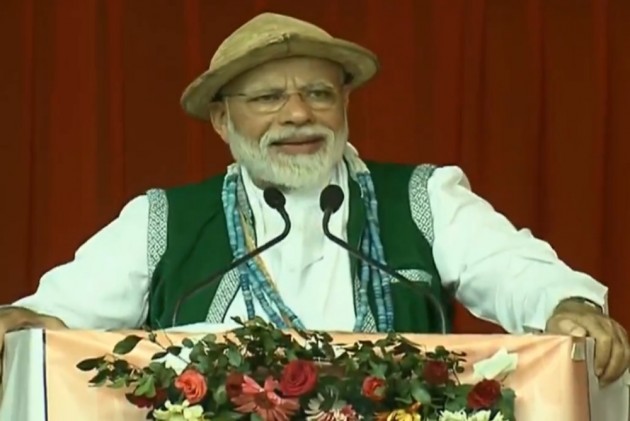 Prime Minister Narendra Modi on Saturday asked the people of Arunachal Pradesh to vote for a 'chowkidaar' who would provide security to the country even as he attacked Opposition parties, saying they were "disheartened" by India's growth and success.

Kicking off his campaign for simultaneous Lok Sabha and Assembly polls in Arunachal, the prime minister said Arunachal is a "shield for the country with the people zealously guarding the border as sentinels".

Immense support for BJP in Arunachal Pradesh. Watch my speech at Aalo. https://t.co/7rvmSVbeyh

Attacking the Congress, Modi said the grand old party is "synonymous with corruption" and has the habit to take people of the country for a ride.

"Whenever the country makes achievements, don't you feel happy? Everyone, irrespective of their social and financial status, regales at India's success stories. There are, however, some who feel disheartened by India's growth and success," the PM said.

"When India hit terrorists in their houses, what was the stand of opposition parties, you have all seen. Even when our scientists made achievements, they found excuses to belittle them," the PM said, urging the people to "punish" opposition parties in the upcoming elections.

He also thanked the people of the state for voting the double-engine government of the BJP to power at the Centre and the state.

"In the northeast, the lotus first bloomed in Arunachal. It is because of your support, the Centre has been able to bring about development in the state," he said.

Listing his government's achievements, the PM said the Centre has provided power connection to 50,000 families, gas connection to 40,000 mothers and sisters and built toilets for over 1 lakh families in the last five years.

"Our government has honoured your hopes, aspirations. This watchman was given the opportunity to bring Arunachal on the country's railway map after seven decades of Independence," he said

Referring to the Arun Prabha channel, launched recently, the PM said it will ensure that people across the country get to learn about Arunachal, its people, culture and festivals.

"Arunachal, which is set to hold Mopin festival soon, will be able to tell the world about its festival and culture through the recently launched Arun Prabha channel," he stated.

Election to Lok Sabha and Assembly will be held on April 11.