Some People Are Suffering Talibani Mindset: Naqvi Slams Owaisi Over Remarks On SC

"These people should understand that the country will not allow any person to disturb our peace, harmony and brotherhood," Union Minority Affairs Minister Mukhtar Abbas Naqvi said. 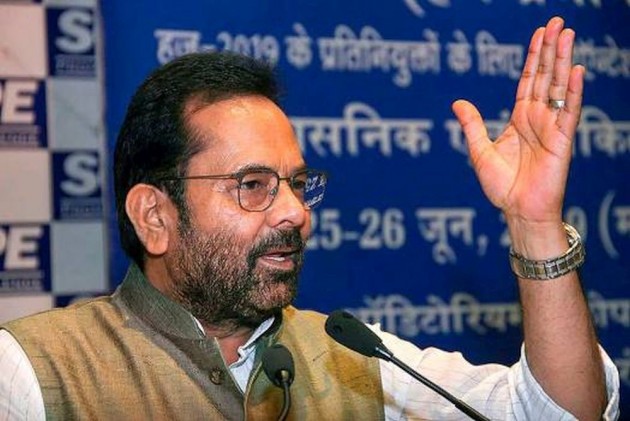 After AIMIM chief Asaduddin Owaisi's comments that the Ayodhya verdict by the Supreme Court was based on "faith over facts", Union Minority Affairs Minister Mukhtar Abbas Naqvi on Saturday said that "some people are suffering from the disease of Talibani mindset."

"Some people are suffering from the disease of Talibani mindset. These people have no trust in the Constitution or judiciary of the country," Naqvi told IANS.

"These people should understand that the country will not allow any person to disturb our peace, harmony and brotherhood," Naqvi added.

"Ayodhya verdict is out, we must not see it as a win or lose for someone. This legal verdict must be saved from bewailing as a 'loss' or from celebrations of a 'win'," Naqvi said in a video message shared on his Twitter handle.

Naqvi's attack on Owaisi came after the AIMIM President on Saturday said that the Supreme Court is "supreme but not infallible" and termed its judgment in the Ayodhya title dispute case as a victory of "faith over facts".

Reacting to the Supreme Court verdict in the Ayodhya case, Owaisi had expressed apprehension that the Sangh Parivar will now target other mosques, including those at Mathura and Kashi.

The Hyderabad MP had also cautioned that the country was heading on the path of a "Hindu rashtra".