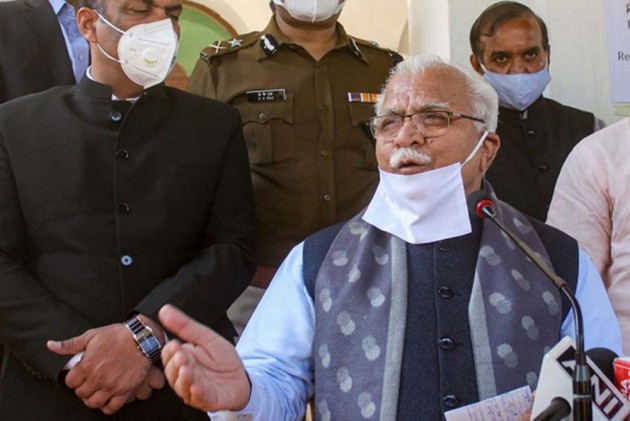 Haryana Chief Minister Manohar Khattar on Saturday alleged that some political parties and organisations are “sponsoring” the farmers’ protests against the Centre’s new farm laws.
He also hit out at Punjab Chief Minister Amarinder Singh, claiming that despite wanting to talk to him about the issue, he (Singh) did not respond adding that his office tried contacting that of Singh’s through telephone for the past three days.

Alleging that there’s a “conspiracy” behind the protests, Khattar said that officials in the Punjab CM’s office are “giving directions” to the protesting farmers. Farmers from Punjab are heading the protests and some political parties and organisations are “sponsoring” it, Khattar said adding that farmers from Haryana have not taken part in the stir. “For this, I want to thank the farmers of Haryana,” he said.

“I also appreciate the Haryana Police for exercising restraint during the past 2-3 days since this issue (Delhi Chalo march) started,” he added. The CM also alleged that some people are grinding their own political axes, which needs to be condemned.

When asked if he tried to speak to Amarinder Singh before the farmers' march, Khattar said, “My office told me that they tried to contact him over telephone on six to seven occasions and every time his staff used to say we will soon get back and then they used to give the excuse that the CM was busy in a meeting and so on.”

“But it was a very strange situation that when a chief minister of a state wants to talk to his counterpart of other state but is unable to get through after so many attempts. For six years, I have been a CM. Never before such a thing has happened. We even talk to Opposition leaders. Earlier too, I have had telephone conversations with the Punjab CM and even when he was busy, he used to call back after 30-60 minutes. This time for three days we made attempts to reach him, but he didn't respond,” alleged Khattar.

Khattar also asserted that farmers should talk to the Centre to resolve the issue. “There is no purpose of bringing large gatherings to Delhi. We appealed to Punjab farmers that their representatives could come and talk. Farmers must talk to the Centre, that is the only way forward,” he said.

Meanwhile, Haryana home minister Anil Vij in Ambala said, “Farmers from the rest of the country have accepted the new farm laws but in Punjab due to political reasons and Amarinder Singh's engineering, they are holding a stir.” He hoped that farmers will soon realise that the laws are for their benefit.