Sonia Gandhi has told some members of the CWC that she doesn't want to be confirmed as president for a full term following Monday's party meet, sources told Outlook. 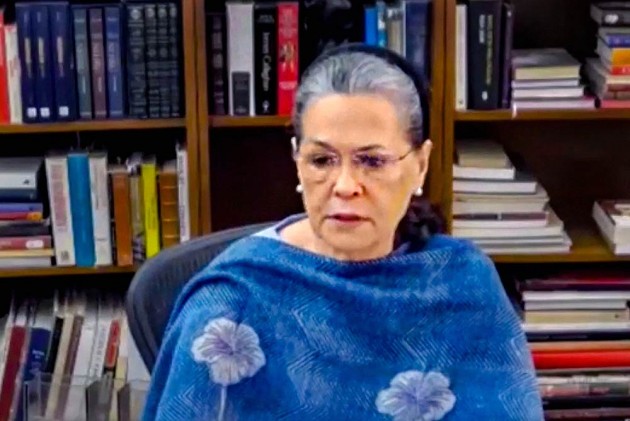 Amid a row within the Congress over leadership issue, the party's interim president Sonia Gandhi has expressed wish to not continue as the party chief.

Sonia has told some members of the Congress Working Committee (CWC) that she doesn't want to be confirmed as president for a full term following Monday's CWC meet, party sources told Outlook.

She has apparently said that since many leaders of the party, cutting across the board, want an overhaul and believe there is a lack of effective leadership, they should suggest an alternative and choose a Congress President at the earliest.

The online meeting, to be chaired by Sonia Gandhi, comes in the wake of 23 senior leaders expressing concern over the continued downward spiral of the party and seeking "collective leadership". The CWC meeting is supposed to discuss this issue.

Sources say AICC general secretary KC Venugopal will be speaking to all CWC members and leaders who wrote to Sonia about organisational overhaul. He has been told to inform CWC members ahead of Monday's meeting that Sonia doesn't wish to continue as party chief.

In a letter to Gandhi, top party leaders – both from the old guard and the young brigade – have asked for sweeping organisational changes, recommending “an institutional leadership mechanism to collectively guide the party’s revival”. They say it is a “national imperative”  intrinsic to the health of democracy in the country. The letter, sent earlier this month, is signed by leaders like Ghulam Nabi Azad, Anand Sharma, Manish Tewari, Raj Babbar, Bhupinder Singh Hooda, Kapil Sibal, Milind Deora, Prithviraj Chavan and Arvinder Singh Lovely – cutting across loyalty lines in the party.

The leaders have suggested in the letter a collective full-time leadership that is “visible and effective”. They have also called for strengthening and empowering of state units, and free, fair and democratic internal polls.

Rahul Gandhi had resigned as party president after a poor showing by the Congress, the second time in a row, in 2019 Lok Sabha elections. Sonia Gandhi was then appointed the interim president and even her extended term came to an end on August 10.

Earlier this month, Sonia had told Rahul and Priyanka Gandhi as well as party leaders Ahmed Patel and KC Venugopal that she has completed a year as the interim chief of the party and a full-time pary president must be appointed at the earliest. However, since the party was then negotiating the Rajasthan political crisis, Sonia did not step down with immediate effect. Back then, the party leaders who were trying to pacify Sachin Pilot had also informed him that an AICC revamp is on the cards to address organisational issues.