'I told in the meeting that the decision of August 5, 2019, was illegal, unconstitutional and immoral and it is not acceptable to people of J&K,' Mehbooba Mufti said 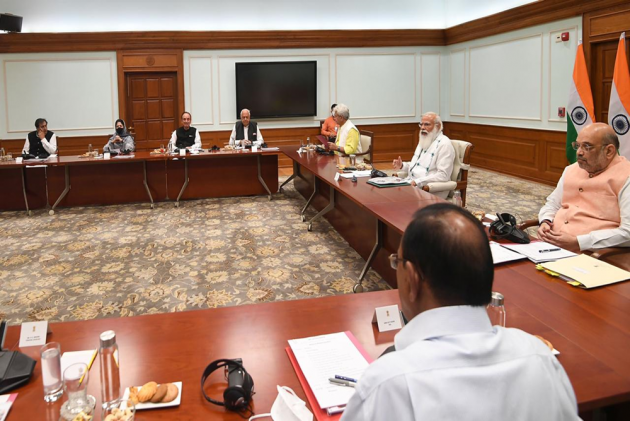 As the meeting between political leaders of J&K and the Prime Minister ended after three and half hours, the majority of the political leaders from the region called for the restoration of statehood apart from conveying their pain over the removal of Article 370.

Most of the leaders sought restoration of the statehood first and the elections later. Congress leader Ghulam Nabi Azad, who was the last speaker among the J&K leaders said the statehood should be first restored than elections should be held in Jammu and Kashmir.

Former Chief Minister Mehbooba Mufti during the meeting spoke on expected lines saying people of Jammu and Kashmir are feeling humiliated after the abrogation of Article 370. “I told in the meeting that the decision of August 5, 2019, was illegal, unconstitutional and immoral and it is not acceptable to people of J&K.”

She said she complimented the Prime Minister for engaging Pakistan and ensuring the ceasefire along the line of control in Jammu and Kashmir.  She said for the peace of the people of J&K if the government has to again to talk Pakistan it should. She also pressed for the opening of the Cross LoC trade and travel, closed since August 2019, between J&K and Muzaffarabad. She sought the end of the "arrest spree" in Jammu and Kashmir and the release of political prisoners.

“It was a good meeting and it was a positive meeting,” the Peoples Conference leader Muzaffer Hussain Baig said.  He said the Prime Minister response was reassuring and he insisted that Kashmir should become a region of peace rather than a conflict.

After the meeting, former Chief Minister Omar Abdullah said they will continue to fight for Article 370 before the Supreme Court. “We made the Prime Minister understand that trust between Jammu and Kashmir and the centre has broken. It is the foremost responsibility of the central government to reinstate that trust,” Omar said. He said the Prime Minister heard them in a very cordial manner. He said the National Conference conveyed the decisions taken for Jammu and Kashmir in the recent months have to be reversed. He said no one in Jammu and Kashmir was happy with the present Union Territory status and people are for restoration of the full statehood. “We don’t need half-hearted statehood. We want full statehood with J&K cadre,” Omar said.

“We don’t accept August 5, 2019 decisions and it includes bifurcation of Jammu and Kashmir. We want when the Supreme Court hears the case the bifurcation of Jammu and Kashmir state will also come up for hearing..” “Farooq Sahab told in the meeting there is an atmosphere of mistrust and this the issue needs to be addressed,” Omar said, adding all these issues cannot be addressed in one meeting.

He added, "We told PM that we don't stand with what was done on 5th Aug 2019. We're not ready to accept it. But we won't take law into hands. We'll fight this in court."

Former Chief Minister Ghulam Nabi Azad said the Congress party conveyed many things during the meeting including how the state of Jammu and Kashmir was dissolved.  “We said in the parliament and outside the parliament, the Home Minister has given assurance about the restoration of the statehood. We asked that the time has come to restore the statehood immediately. There is peace in Jammu and Kashmir. There is a ceasefire along LoC. So it is a better time to restore statehood. We also asked for assembly elections. When you hold Panchayat election and DDC elections, you should also hold Assembly elections. We also said for long Jammu and Kashmir had historically rules about the land and jobs and the central government when it comes with the bill (about the restoration of the statehood) it should provide provision for the exclusive rights over land and jobs for the people of Jammu and Kashmir in it,” Azad said.

“It was a very cordial and very dignified meeting and we were all in agreement that we must work for democracy,” PC leader Muzaffer Baig said. He said the majority of the people asked for restoration of the statehood. Baig also said that he asked for extending Article 371 to Jammu and Kashmir with provisions of Article 35A should be incorporated into it till the Supreme Court gives a verdict on Article 370.