In the Kanthi Dakshin seat of Purba Medinipur district, voters staged protests outside a polling booth over alleged malfunctioning of an electronic voting machine (EVM). 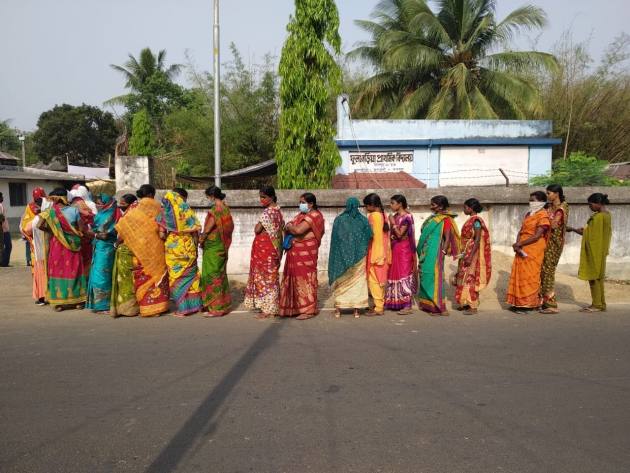 During the first phase of the West Bengal assembly election, sporadic incidents of violence were reported from various places that went to polls on Saturday even as the overall poll situation was largely peaceful with 79.79 per cent turnout recorded till 5 pm, an official said.

"Till 5 pm, 79.79 per cent polling has been recorded in the state. By and large, elections were held peacefully," the EC official said.

Voting was held in 30 seats - several of them part of the once-Naxal-hit Jangalmahal region -- amid tight security and strict adherence to COVID-19 guidelines, the Election Commission (EC) official said.

In some booths, voters were provided with masks, sanitiser and polythene gloves.

Of the 30 seats that went to the polls, nine are in Purulia, four each in Bankura and Jhargram, six in Paschim Medinipur, and seven in high-stakes Purba Medinipur district.

Violence and scuffle, however, marred the polling process in some areas.

In the Kanthi Dakshin seat of Purba Medinipur district, voters staged protests outside a polling booth over alleged malfunctioning of an electronic voting machine (EVM).

The agitators blocked a road outside a polling station at Majna, claiming that the VVPAT slip showed results in favour of a particular party, no matter which outfit they voted for.

A contingent of central forces was sent to the area to control the situation, an EC official said, adding that the VVPAT machine was eventually replaced.

Chief Minister Mamata Banerjee, during a rally in Paschim Medinipur, claimed that the BJP has manipulated EVMs and used central forces to intimidate the voters.

"Today, in some polling booths of Kanthi, the VVPAT showed that votes were getting polled in favour of the BJP, even as a person pressed the button next to the symbol of some other party. In some areas, central forces were seen threatening voters. The EC must take action," she said.

He also alleged that his car was vandalised, and his driver sustained injuries in the attack.

"I was passing through Kanthi, when the TMC supported hurled bricks at my car and smashed its window panes. It seems they have lost their minds, sensing defeat," Soumendu said.

At Mohonpur in the Dantan assembly constituency, four persons were injured in clashes between workers of the TMC and the BJP, after alleged attempts to capture booths were made by some of them.

At Keshiari in Paschim Medinipur, security forces baton-charged locals who staged demonstrations, claiming that votes were being cast only in favour of one party.

Later in the day, the protesters blocked an adjoining road alleging that security forces attacked women during house-to-house raids.

A man identified as Mangal Soren was found dead near his home in Begumpur area of Keshiari earlier in the day, the police said.

BJP leaders claimed that Soren, a party supporter, was killed by TMC "goons", a charge rubbished by the ruling party.

In its report to the EC, the district administration said the death had no connection with the polling process.

Dipak Bauri, a BJP leader in Purulia, claimed that the constituency's TMC candidate Sujoy Bandyopadhyay threatened to shoot him during an altercation.

In Paschim Medinipur's Salboni seat, CPI(M) candidate Susanta Ghosh was heckled, and stones were hurled at his car, allegedly by TMC supporters. Police personnel posted in the area escorted him to safety.

According to reports, a few journalists who were covering the incident were also manhandled.

An EC official said three persons were arrested in connection with the attack.

The TMC, however, denied any involvement.

Long queues were seen outside most booths during the morning hours, with people stepping out early in the day to avoid the sweltering heat, and violence or protests, if any.

In several areas, including Egra, voters complained of intimidation by central forces.

A few EVMs found non-functional during the voting process were either replaced or restored, the EC official said, adding that the polling wasn't affected due to it.

The TMC has raised concerns over the "fluctuating turnout figures" on the EC's mobile app.

The EC, however, allayed the concerns and said it takes time to collate the final figures.

The BJP, meanwhile, moved the EC accusing the TMC of letting loose a reign of fear in several areas.

More than 73 lakh voters were eligible to exercise their franchise and decide the fate of 191 candidates during the first phase of elections -- the process for which was scheduled to end at 6.30 pm.

In 2016, the TMC had won 27 of the 30 seats, where polling was held on Saturday. The Left-Congress alliance had won the remaining three.