Stalin Unfurls Tricolour, But He Basks In A Right Earned By His Father 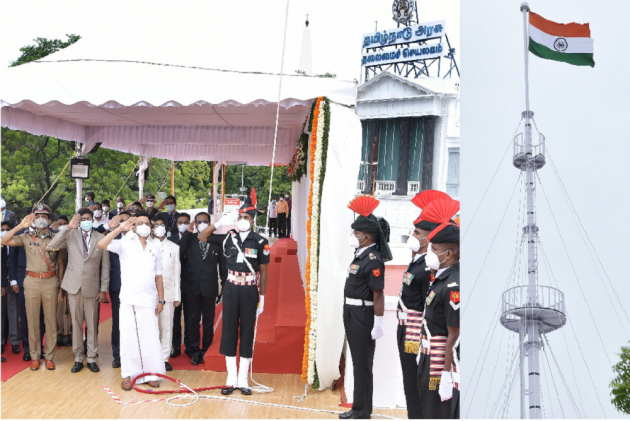 When M.K. Stalin unfurled the tricolour from the ramparts of Fort St. George – the seat of power in Tamil Nadu – for the first time as Chief Minister on Sunday, he would have silently thanked his father the late Karunanidhi for the privilege.

PM Dons Saffron Turban: A Look At Modi's I-Day Turbans Over The Years

From 1974 Chief Ministers started to unfurl the national flag on I-Day, the credit for which should go to Karunandihi. Karunanidhi who was Chief Minister five times had unfurled the national flag 14 times. While Jayalalithaa unfurled the flag the highest number of times – 16, M.G. Ramachandran had done so 11 times and Edappadi K. Palaniswami had the honour four times between 2017 and 2020.

In Chennai the tricolor is unfurled from one of the highest flag masts in the country, measuring 148 feet. The teak base of the mast originally came from a ship and was erected when Elihu Yale was the Governor of Madras between 1687-92. After Independence it was on this staff that the tricolor was hoisted every morning by the Military Police, lowered before sunset. When the Chief Ministers had to unfurl the flag, the tied down flag would be hoisted by the army men and the Chief Minister would only have to give a symbolic tug to thick white rope, since it would require the strength and knack of trained hands to unfurl the flag perched at that height. In 1994 the wooden mast was replaced by a steel mast considering the effects of high winds and corrosion on the seaside.

An army PRO once explained the difference between flag hoisting on R-Day and unfurling on I-Day. “If you noticed, the President and Governors would hoist the tricolor from waist high to the top of the mast on Jan 26. But on August 15, the Tricolour would already be tied up with a special knot and remains perched on top of the pole. The Prime Ministers and the Chief Ministers would only have to pull the rope to unfurl the flag.”