PM Modi also hit out at those behind the protests, saying a new 'breed' of agitators called 'andolan jeevi' has emerged in the country and they cannot live without an agitation 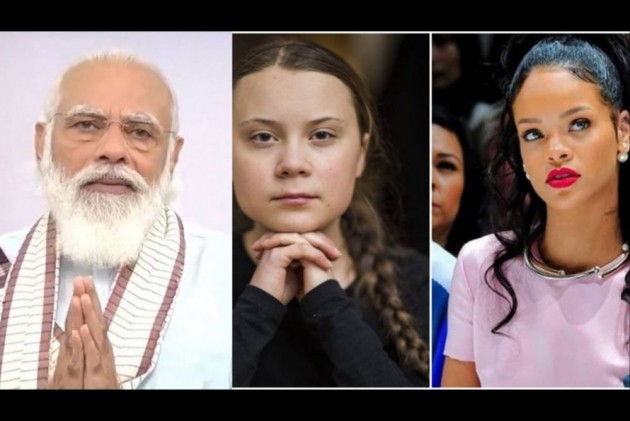 Prime Minister Narendra Modi on Monday slammed the narrative against his government on the farmers’ issue as he warned the country against the new FDI that now stands for “Foreign Destructive Ideology”.

PM Modi smartly dubbed the term FDI (foreign direct investment) as "foreign destructive ideology" to point out at the 'global influencers,' who allegedly backed up farmers. He termed them as factors that destroy the peace in the country and cautioned the nation not to be provoked by them.

Speaking in the Rajya Sabha, PM Modi reiterated his stand on farm laws and said that there are continuous efforts to reach an agreement between the farmers and the government. He urged everyone to stand together and help resolve the issue.

The prime minister also hit out at those behind the protests, saying a new "breed" of agitators called "andolan jeevi" has emerged in the country who cannot live without agitation and the nation should guard against them.

Last week, international pop star Rihanna became the first global name to voice her support to the ongoing farmers' agitation while criticising the internet shutdown at the protest site.

Later, Thunberg, Swedish environmental activist, also backed the agitation, tweeting, "We stand in solidarity with the #FarmersProtest in India."

"I invite you to come forward and solve the problems of the agriculture sector by making those protesting against the laws to understand the reforms...Let's move forward together," he said.

"We urge those sitting on the agitation that even though it is their right to agitate, the manner in which the old people are sitting there, is not right. They (agitators) should be taken back. They should end the agitation and we will together find a solution as all doors are open for dialogue. From this House, I again invite them for dialogue," he said while appealing to farmers to end their agitation.

"We should move forward and not take the country behind. All the opposition and the government, protesters should give these reforms a chance and see if this change helps them. We are ready to remove shortcomings.

"I assure you that Mandis will be modernised. Not just this, MSP was there, it is there and will remain. Cheap ration given to over 80 crore people will continue. Please do not try to spread misinformation. We also need to strengthen means to increase the incomes of farmers," he also said.

The prime minister admitted that there were problems in the agriculture sector and said everyone together has to find a solution to them.

"I feel time cannot wait. Every law requires reforms as we are not ones living in a static state. We should all move together with good reforms," he said.

He noted that if "we delay the reforms further while sticking to our political preferences, we will usher the farmers towards darkness and we have to worry about it".

Modi also stressed that India is very proud of the contribution of Sikhs and the language used by some for them will not benefit the country. He alleged that some people are also trying to defame Sikhs.

"This is a community that has done so much for the nation. The country takes pride in the contribution of Sikhs, but some people are trying to defame them. The words and blessings of the Guru Sahibs are precious. The language used by some for them will not benefit the country," he said, replying to the Motion of Thanks on the President's address in the Rajya Sabha.

India is very proud of the contribution of Sikhs. This is a community that has done so much for the nation. The words and blessings of the Guru Sahibs are precious: PM @narendramodi #PMinRajyaSabha

On the farm sector and the ongoing protest, Modi said, "MSP was there. MSP is there. MSP will remain in the future. Affordable ration for the poor will continue. Mandis will be modernised".

MSP will remain in the future.

Affordable ration for the poor will continue.

Modi said since 2014 his government has initiated changes in the agriculture sector aimed at empowering farmers.

The crop insurance scheme was changed to make it more farmer-friendly. The PM-KISAN scheme was also brought in, he added.

The MEA responded to Rihanna and Greta's tweets and said the Parliament of India passed the reformist legislation relating to the agricultural sector and noted that some of the vested interest groups have tried to mobilise international support against India.

Meanwhile, hundreds of farmers have been protesting against Centre's farm laws at the various border points in Delhi--Singhu, Tikri and Ghazipur. On Republic day, violence erupted between protestors and police during the Tractor rally after which government ordered to shut down the internet in the affected areas.