'If this is not stopped or controlled, we will continue to give a befitting reply,' Rajnath Singh said, a day after Indian claimed to have killed six to ten Pakistani soldiers and destroyed 3 terror camps. 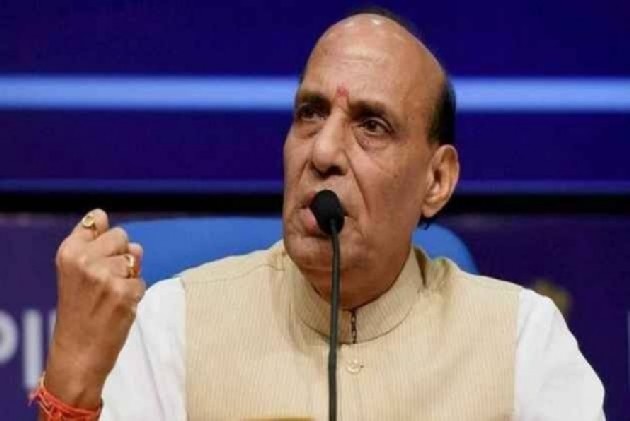 Continuing his attack on Pakistan, Defence Minister Rajnath Singh on Monday warned it to stop terror activities -- which it has been getting involved in to destabilise India -- or brace itself for a befitting response from the Indian armed forces.

"Our soldiers never launch an offensive against Pakistan. The other side is doing activities to destabilise India (by sponsoring terrorism and resorting to shelling)," Singh was quoted as saying by PTI.

"If this is not stopped or controlled, we will continue to give a befitting reply," Singh said.

'We Will Enter Pakistan If It Continues To...': J&K Governor Satya Pal Malik

Singh was at a function to inaugurate a 1,400-ft bridge across the Shyok River near the Line of Actual Control (LAC) with China in Leh district of Ladakh.

In his address, he also asserted that after the abrogation of sections of Article 370 and Article 35A, the Ladakh region will now only "draw friends" and "leave no scope for enemies".

"However, our neighbour Pakistan... Our armed forces have never been offensive on the Pakistani side. We have never done the first firing," Singh said.

"But, by supporting terror activities attempts have been made from the other side to destabilise, weaken and compromise the integrity of India," he said.

And, Indian armed forces have given a "befitting reply" to them, he said.

His statement comes a day after Army chief General Bipin Rawat said that three terror camps have been destroyed by Indian Army in retaliation to unprovoked ceasefire violation from the Pakistani side at Tangadhar sector of Jammu and Kashmir.

Singh said, "If they do not stop infiltration, our armed forces will keep giving befitting replies until they (Pakistan) stop such activities."

He said India has good relations with China. China spoke nothing regarding Kashmir during meetings with Prime Minister Narendra Modi and considers Kashmir as an internal issue of India, he added.

The Colonel Chewang Rinchen Bridge falls at the fag end of the recently-completed road connecting Leh with the Karakoram Pass and will allow ease of troop movement to the Daulat Beg Oldi sector.

Colonel Rinchen remains one of the six forces personnel to have won the Maha Vir Chakra, the second-highest military honour presented for acts of gallantry in the presence of the enemy, on two occasions during his career.

He was first honoured with the Maha Vir Chakra in 1948 during the first Indo-Pak conflict over the Kashmir issue.

The award was conferred upon him for the second time for gallantry displayed during Operation Cactus Lily in December 1971 during which he freed nine enemy strong points, held by one to two platoons, in Partapur sector in Ladakh.

Tensions between India and Pakistan have soared ever since the Centre on August 5 abrogated Article 370, which granted special status to Jammu and Kashmir.

On Sunday, the two countries once again came face-to-face at the border and exchanged fire. India, later in the day in retaliation, claimed it had killed 6-10 Pakistani soldiers and destroyed 3 terror camps in the PoK.

Earlier on Monday, Pakistan military spokesman Major General Asif Ghafoor said Indian Army's assertion that it targeted terror camps in Pakistan Occupied Kashmir was false. He said India is welcome to take any foreign diplomat or media to the site to prove its claim on ground.