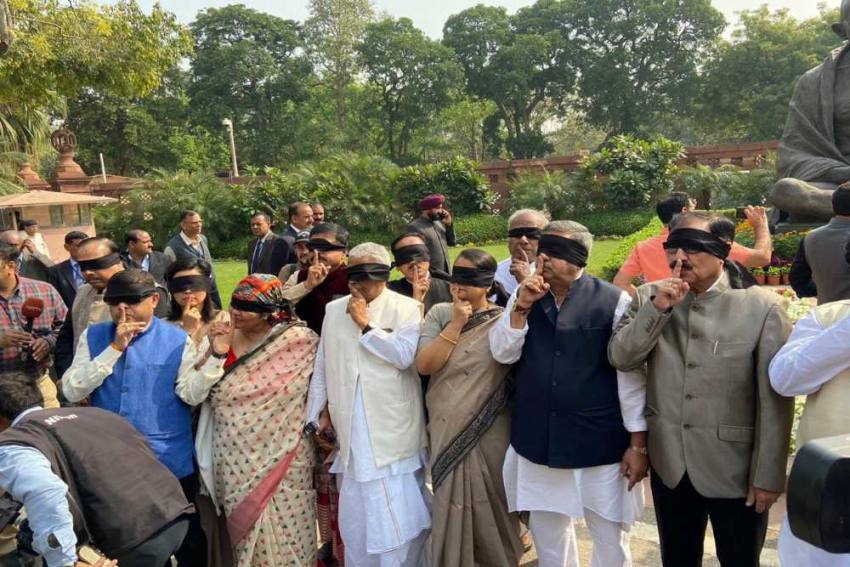 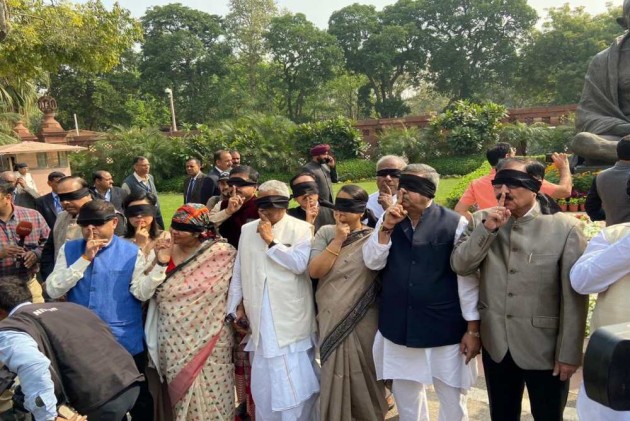 Congress, Trinamool and AAP MPs staged separate dharnas on Monday near the Gandhi statue in Parliament, demanding answers from the government on the Delhi riots on the first day of the second half of the Budget Session.

Covering their eyes with black bands and holding a finger on their lips in an apparent imitation of the Gandhi's Three Monkeys, MPs like Mohua Mitra, Sukhendu Shekhar Rai took part in the protest.

At least 42 people died and more than 200 were injured during the communal riots in northeast Delhi.

Lok Sabha proceedings were also adjourned till 2 pm as a mark of respect for a sitting member, JD(U)'s Baidyanath Prasad Mahto who passed away last month.

Opposition MPs have also given notice in Lok Sabha and Rajya Sabha to discuss the Delhi riots.

Congress Lok Sabha MP K Suresh on Monday said that his party is seeking the suspension of the Question Hour in the Lower House to hold discussion over the violence in which at least 43 people lost their lives.

"We are moving adjournment motion over the riots in Delhi in Parliament. We have demanded suspension of the Question Hour to have an immediate discussion about the situation in Delhi. More than 43 people have been killed so it is very serious," Suresh told ANI news agency.

Speaking about Union Minister Anurag Thakur refuting the claims that he had raised slogan "Desh ke ghaddaron ko..." during the assembly elections in Delhi, Suresh said, "The country is aware of whatever he (Thakur) said during the Delhi election campaign and he cannot go back on his statements. Whatever he says now will not be accepted because everything is on record."

Parliament resumes on Monday after recess in the Budget Session. The second part of the Budget Session is likely to be stormy as the Congress party has said that it will seek the resignation of Union Home Minister Amit Shah over the Centre's failure in containing violence in the national capital.

Trinamool MPs staged a dharna demanding answers from the government on the Delhi riots near the Gandhi statue in Parliament on the first day of the second half of the Budget Session.

Holding placards and shouting slogans, the MPs said that the issue will be raised very strongly in Parliament.

On Sunday Congress leader Adhir Ranjan Chowdhury had also said that his party will continue to press for the resignation of Home Minister Shah and will also "unmask" the BJP over the violence in Delhi, which left at least 43 people dead and over 200 injured.

"We will raise all the important issues and unmask them. We will not spare them (BJP). We are asking for Amit Shah's resignation. We will continue to do so in Parliament as well," Chowdhury said.

During the second half of the Budget Session, the government is expected to push its legislative agenda that includes Bills relating to surrogacy and resolution of disputed tax.

Sources said a meeting was held at the residence of party chief Sonia Gandhi on Saturday which discussed the party's strategy to corner the government in Parliament on Delhi violence.