The Lok Sabha has already cleared the Citizenship Amendment Bill (CAB), and it is likely to be tabled in the Rajya Sabha on Wednesday. 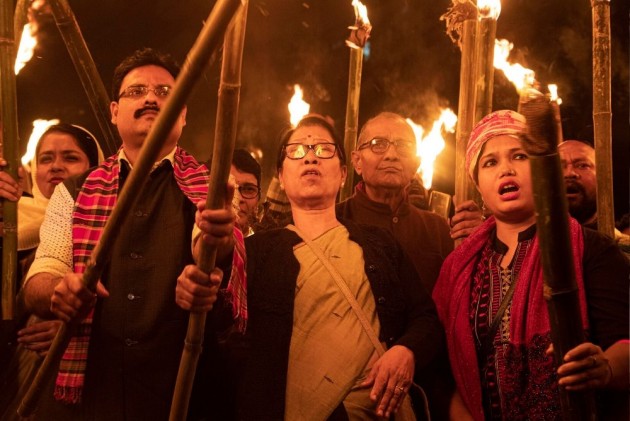 Life in Assam and other states in the North East came to a screeching halt on Tuesday as they observed a day-long bandh -- called by the North East Students Organization (NESO), the umbrella body of all the students’ associations, -- against the controversial Citizenship (Amendment) Bill.

The Lok Sabha has already cleared the bill, and it is likely to be tabled in the Rajya Sabha on Wednesday.

The All Assam Students Union (AASU), one of the units of NESO, has slammed the government for what they refer to as "communal and undemocratic bill".

“This is not at all acceptable. This is communal and undemocratic. If the centre can exempt some states from the CAB, why not the entire Assam? We will continue to protest against the bill,” said AASU chief adviser Samujjal Kumar Bhattacharya on Tuesday morning.

Bhattacharya also demanded the entire northeast be brought under the ILP to guard the indigenous people of the region.

“It has been a long demand for us. We are already plagued by the infiltrators. We need the protection and ILP is one of these,” he added.

The bandh has severely hit the train services in Assam; the vehicles were off roads and shops remained shut. Protestors burnt tyres on the national highways and shouted anti-government slogans across the state. The bandh has affected all seven states, expect Nagaland, which was exempted because of the ongoing Hornbill Festival in the state.

The students and people have continuously participated in agitations against the bill across Assam and the region.

On Monday evening, thousands of students and ex-students of Gauhati University led a torch rally against the bill. “We as a student have responsibilities towards our people and state. We just can’t accept whatever the government imposes on us. We have seen the students have played a major role in the past. We will continue to oppose the bill,” said Jayanta Sharma, a student who took part in the protest rally.

However, the proposed law exempts the states with special provisions such as 'Inner Line Permit' (ILP) required to enter Arunachal Pradesh, Mizoram and Nagaland (except Dimapur). Besides this, the states and areas covered under the provisions of the Sixth Schedule namely Meghalaya and some areas in Assam are also exempted. Union Home Minister Amit Shah also said the ILP will soon be implemented in Manipur.

AASU spearheaded the six-year-long Assam Agitation to drive out illegal migrants from Assam in the 1980s. As per the Assam Accord, signed after the Assam agitation, the cut-off date to detect the illegal citizens is March 24 of 1971 irrespective of their religion, caste and creed.

But this bill will help non-Muslim migrants, who came here before December 3, 2014, to be eligible for the citizenship.

Protesting against the CAB, veteran filmmaker Jahnu Barua has decided not to participate in the State Film Awards scheduled for the last week of December. The Padma Bhushan award-winning filmmaker, along with his team, has withdrawn his latest film "Bhoga Khirikee" (Broken Window) to register their opposition to bill.

The multiple national award-winning filmmaker said that it’s a decision taken on behalf of the entire crew and cast of the film.

“We oppose the bill which is against our state and the people. It’s our responsibility to oppose anything that is against our interests,” Barua told Outlook.

The film has been screened in several international film festivals across the globe.

Apart from that, the artistes who have come out on the street on Tuesday protesting against the CAB have jointly decided not to participate in the upcoming "India - Japan Annual Summit 2019" which is scheduled to take place in Guwahati on December 15 as a mark to oppose the bill.

Meanwhile, in Manipur, there is a sense of celebration after the home minister’s announcement that Manipur will be brought under the ILP soon. Manipur chief minister N Biren Singh declared December 10 a state holiday following the assurance given by Amit Shah for exempting Manipur from the purview of CAB.