No Preaching By The US Yet, Blinken Praises Indian Democracy

Though Secretary Blinken touched on liberal values while holding a meet with civil society groups in Delhi, he is unlikely to allow human rights to come in the way of India-US ties 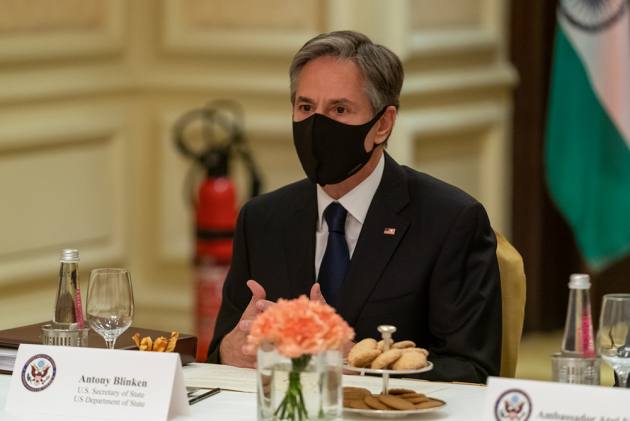 The first item on the agenda for visiting US Secretary of State Antony Blinken in Delhi was a roundtable with members of civil society. NGOs are not popular with the Modi government which has made operations difficult by stopping flow of foreign funds to those with connections abroad. But local NGOs including those of Hindutva outfits are encouraged.

In his roundtable today, Secretary Blinken emphasised the importance of civil societies in shaping democracy. “We also know that successful democracies include thriving civil societies.” Joe Biden’s administration unlike the previous Trump White House is keen on promoting democracy and liberal values. He made the emphatic point : “…if we want to make our democracies more open, more inclusive, more resilient, more equitable, we need vibrant civil society.’’ Stating he was proud of the connections that exist between civil society organizations in our countries, he said, “I want to support more of those connections to make the overall partnership between our democracies even stronger.’’

Among those attending the roundtable were members of the Dalai Lama’s cultural centre. And in an obvious message to China, Blinken also met with Ngodup Dongchung a special representative of the Dalai Lama, a member of the Tibetan government in exile. China considers Tibet’s spiritual leader as a revisionist and is likely to react sharply to the meeting. The US and other countries often use the Dalai Lama to irritate China.

Addressing the gathering, Blinken spoke of shared values and shared aspirations of people of both countries. “The Indian people and the American people believe in human dignity, in equality of opportunity, the rule of law, fundamental freedoms, including freedom of religion and belief. We believe that all people deserve to have a voice in their government and be treated with respect no matter who they are. These are fundamental tenets of democracies like ours, and our purpose is to give real meaning to these words and constantly renew our commitment to these ideals.’’ He acknowledged that “our democracies are work in progress.’’ He further added, “As I said before, sometimes that process is painful, sometimes it’s ugly, but the strength of democracy is to embrace it.’’

Making sure that he does not embarrass his hosts, Blinken also praised Indian democracy. “Here in India, that includes the free media, independent courts, a vibrant and free and fair electoral system – the largest expression of free political will by citizens anywhere in the world. At a time of rising global threats to democracy and international freedoms – we talk about a democratic recession – it’s vital that we two world leading democracies continue to stand together in support of these ideals.”

I was pleased to meet civil society leaders today. The U.S. and India share a commitment to democratic values; this is part of the bedrock of our relationship and reflective of India’s pluralistic society and history of harmony. Civil society helps advance these values. pic.twitter.com/5NL2WiQ13o

The US is well aware of the situation in India. The Pegasus controversy and spying on political opponents and the media have been splashed in front pages across the world. The plight of farmers and minorities is also well known. So, while touching on liberal values, to keep the progressives within the Democratic party satisfied, Blinken is unlikely to allow human rights to come in the way of America’s strategic ties with India. For Biden, checkmating China in Asia is more important than preaching human rights to the Modi government. India knows that.