Such People Have No Religion: Nitish Kumar Hits Out At Giriraj Singh On Eid

The Bihar Chief Minister, who sported a skull cap, also extended good wishes to citizens, especially to those who follow Islam. 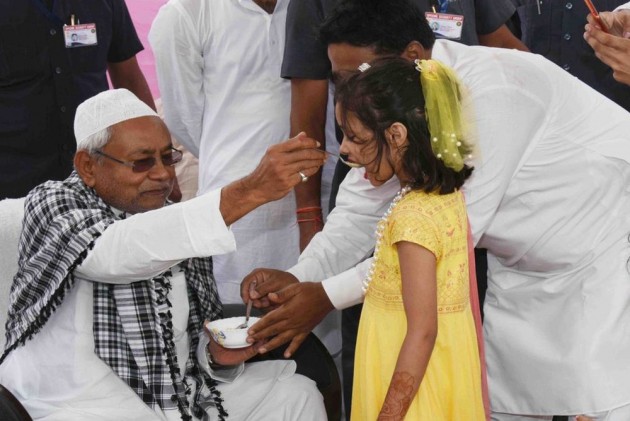 Bihar Chief Minister Nitish Kumar on Wednesday took a pot-shot at Union Minister Giriraj Singh saying those who give unnecessary statements to remain in limelight have 'no religion'.

"Giriraj, I will not give any reaction to what he said. Some people have developed an attitude to say unnecessary things to remain in the limelight so that media cover them. Such people have no religion as every religion preaches respect and love for each other," he said while speaking to media persons in Patna after joining Muslims in prayers at a mosque on the occasion of Eid-Ul-Fitr.

The Bihar Chief Minister, who sported a skull cap, also extended good wishes to citizens, especially to those who follow Islam.

"I wish people maintain brotherhood and peace across the nation. Everyone should pray for rains in Bihar as the state is likely to face severe drought condition. We all should work together and not use derogatory language against each other. You can follow any religion but every religion preaches respect and love for each other. Those who do opposite have no religion," he said.

Singh's tweet in Hindi said, "How beautiful the pictures would have been if fruit only feasts were organised during Navratri with similar affection? Why do we fall behind when it comes to our own practices and religion and ahead in showoff?"