Sena president Uddhav Thackeray had reportedly said that other options (read NCP and Congress) are available for his party. 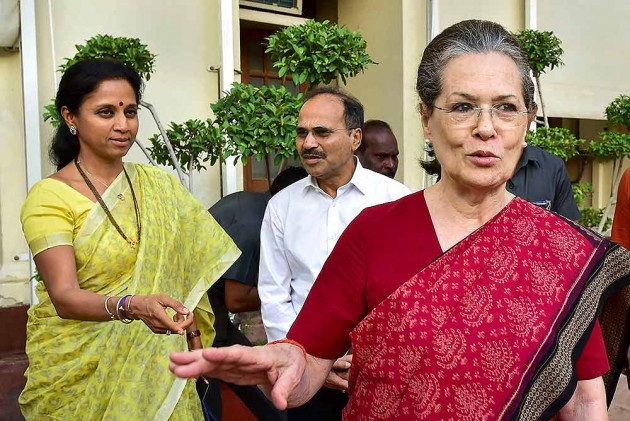 At a time when the BJP and the Shiv Sena are unable to arrive at a consensus on sharing power in Maharashtra, a Congress leader on Saturday wrote to party chief Sonia Gandhi requesting her that in the eventuality of Sena asking for suppport fom the Party, the Congress Party should relent.

The Sena lost no time in welcoming the stand of the Congress leader Hussain Dalwai, a Rajya Sabha MP from Maharashtra, who has written the letter.

Sena leader Sanjay Raut welcome his statement while maintining that since Sena fought the elections in an alliance, they will abide by the coalition dharma till the end."

But Dalwai, in his letter, recalled the Sena had supported Congress nominees Pratibha Patil and later PranabMukherjee for the post of President of India in the past.

"Shiv Sena and BJP are different. The Sena had supported Pratibha Patil, Pranab Mukherjee for the President's post. Shiv Sena politics has become all-inclusive unlike that of the BJP which is extreme. We must support the Sena to keep the BJP out of power," Dalwai told reporters while quoting his letter.

He said a cross-section of the Muslim community in the state would prefer the Sena over the BJP.

The Congress seems to be divided over supporting the Sena which is one of the founding members of the BJP-led National Democratic Alliance (NDA).

When asked about Dalwai's letter, senior Sena leader Sanjay Raut has said, "Dalwai belongs to the socialist ideology. He comes from a family of progressive Muslims. We welcome his stand. But, Sena fought the elections in an alliance and we will adhere to the coalition dharma till the end."

The recent elections in Maharashtra denied the BJP absolute majority desired by the party.

The BJP failed to perform up to the mark though it emerged as the single largest party by winning 105 seats, 17 less than the 2014 tally, in the 288-member House. The ally Sena won 56 seats, 7 less than its 2014 performance.

The Sena and the BJP have since been locked in a battle of nerves over sharing of power.

Both the parties, who were partners in the outgoing government, have not yet started formal discussions even though the tenure of the current Legislative Assembly ends on November 8.

The bone of contention is the Sena's demand for the CM's post for a equal period of 2.5 years and 50:50 division of portfolios. Both these demands have been rejected by the BJP which has insisted that Chief Minister Devendra Fadnavis will continue to be the CM for the next five years.

Sena president Uddhav Thackeray had reportedly said that other options (read NCP and Congress) are available for his party.

Top Congress leaders from Maharashtra on Friday held meetings in Delhi and discussed the political situation with Sonia Gandhi.