Sushma Swaraj passed away at the All India Institute of Medical Sciences (AIIMS) in New Delhi on Tuesday night after suffering a cardiac arrest. The senior BJP leader was 67. 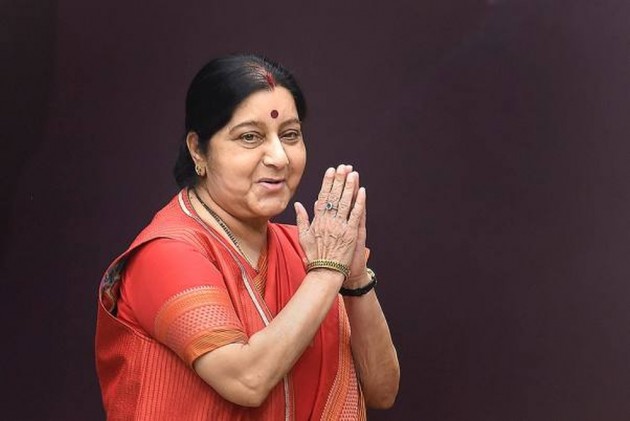 UN General Assembly President Maria Fernanda Espinosa has expressed condolences at the demise of India’s former External Affairs Minister Sushma Swaraj, describing her as an "extraordinary" woman and leader who devoted her life to public service.

Swaraj passed away at the All India Institute of Medical Sciences (AIIMS) in New Delhi on Tuesday night after suffering a cardiac arrest. The senior BJP leader was 67.

“Saddened by the news of the passing of @SushmaSwaraj, an extraordinary woman & leader who devoted her life to public service. I had the honour of meeting her in my visits to #India, & will always remember her fondly,” Espinosa tweeted.

She added in her tweet that she sends her “deepest condolences to all of her loved ones @IndiaUNNewYork," tagging India’s Permanent Mission to the UN in her message.

Before assuming her role as the President of the 73rd session of the UN General Assembly in September 2018, becoming only the fourth woman to lead the General Assembly in its 73-year history, Espinosa had visited India and met Prime Minister Narendra Modi and Swaraj.

In her meeting with Swaraj, the top UN official had discussed revitalisation of the UN, including reform of the Security Council, strengthening global counter terrorism legal framework and other global issues.

Condolence messages poured from across India and the world at the demise of Swaraj, one of the most charismatic and dignified political leaders.

Over the years, Swaraj had visited the UN on multiple occasions, addressing world leaders in Hindi at the annual high-level General Assembly sessions.

She had headlined the commemoration of the first International Yoga Day at the UN in June 2015, launching the annual celebration of Yoga at the world body’s headquarters along side then UN Secretary General Ban Ki-moon.

India's Permanent Representative to the UN Ambassador Syed Akbaruddin tweeted a video montage of Swaraj's powerful speeches at the UN, beginning from her address to the General Debate at the 70th General Assembly session in 2015 till her statement in 2018.

"Leaving behind indelible memories. We @IndiaUNNewYork will always cherish memories of her @UN. Farewell Madam @SushmaSwaraj," Akbaruddin said in an emotional message on Twitter.

The Global Organisation of People of Indian Origin (GOPIO) also conveyed its heartfelt condolences on the passing of Swaraj. “As minister looking after the Overseas Indian Affairs, GOPIO has had a close working relation and cooperation on many of the NRI and PIO issues as well as on new initiatives from her ministry.”

The organisation said it has been working with Swaraj since she was the leader of BJP in the Rajya Sabha. “In her passing away, we will miss a Statesman as well as a sincere and able political leader,” GOPIO Chairman Thomas Abraham and President Sunny Kulathakal said in a statement.