'She was an amazing person. Though she was holding such a high office, she had absolutely no attitude, was very humble and down-to-earth, always made us comfortable though we were common people,' said Hamid Ansari who was helped by Sushma Swaraj after being jailed in Pakistan 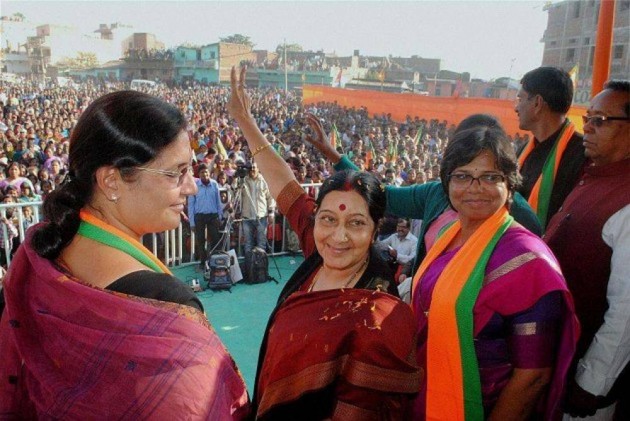 Many people have fond memories of former Minister for External Affairs Sushma Swaraj, who passed away in New Delhi late on Tuesday.

Among them is the family of a youth, Hamid Ansari, who spent over six years in a Pakistani jail on an espionage charge and was released on December 18, 2018. Hamid had gone missing in Pakistan on November 11, 2012.

"It was during this ordeal that Sushmaji went out of her way to help us in getting Hamid safely back home," recalls his father, Nehal Ansari.

"During the trying period, Sushmaji wrote as many as 96 officials letters to the Pakistani authorities regarding my son. She always responded positively to all our appeals for assistance and finally my son was freed with her intervention," a grateful Nehal Ansari told IANS.

During those dark days, the Ansari family met Sushma Swaraj around a dozen times at her office in New Delhi as they struggled with the Pakistan government to get Hamid released.

"She was an amazing person. Though she was holding such a high office, she had absolutely no attitude, was very humble and down-to-earth, always made us comfortable though we were common people," Ansari said.

Whenever the family sought to meet her, Sushma Swaraj was always available for them. They did not have to wait long for appointments or go through the bureaucratic hurdles, he added.

"In fact, last year, after Hamid's release, she called us again to her office. She gave us a warm welcome, congratulated us, hugged Hamid and wished him the best in life. Sushmaji also told Hamid that her doors were always open for him for any help in future. That was the lady," Ansari said.

After hearing of her demise early today, the Ansaris said they were "stunned", but "Sushmaji will remain in our hearts forever" for all that she did for their son.

Hamid described Sushma Swaraj was "like a mother" to him, and after his release, she counselled him to look ahead in life. Hamid said, "she will always remain alive in our hearts".

Incidentally, Hamid is currently penning the story of his Pakistan ordeal and is hoping to complete the book by December 2019, informed his father.

Another Mumbaikar who got unwavering support from Sushma Swaraj is former Indian Navy officer Kulbhushan Jadhav, currently in Pakistan custody.

It was attributed largely due to Sushma Swaraj that the matter finally resulted in Jadhav's hanging being stayed by the International Court of Justice last month. The Jadhav family - which has not interacted with the media - was in touch with Sushma Swaraj all through. They even met her in Delhi.

One of Jadhav's neighbours, P. S. Menon said, "People in crises in foreign lands always looked up to Sushma Swaraj for help and she even took note of the Twitter messages, something that we have never witnessed before".

"There are so many instances when Indian nationals having problems abroad or facing complications within the country could knock on her doors vide a Twitter message and be assured that it would be taken note of. She was indeed the 'Common Man's MEA' in the true sense," said an emotional Menon.

The Maharashtra Bharatiya Janata Party (BJP) on Wednesday morning put up a portrait of Sushma Swaraj at the party headquarters in Nariman Point to enable workers and common masses pay their last respects to her.