'I am 100 per cent confident of my victory in Nandigram. The people of the area are with me. I am the son of the soil,' Suvendu Adhikari told reporters. 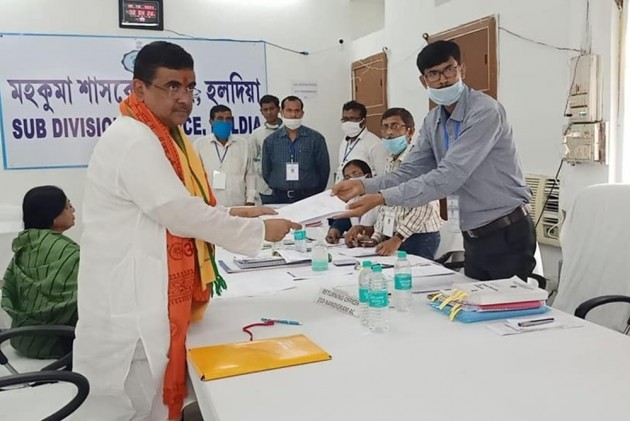 After filing his nomination from the Nandigram seat, BJP leader Suvendu Adhikari on Friday said he was "100 per cent" confident of his victory.

Adhikari filed his papers at the sub-divisional office in Haldia after leading a-km-long roadshow.

"I am 100 per cent confident of my victory in Nandigram. The people of the area are with me. I am the son of the soil," he told reporters.

Adhikari, who switched over to the BJP in December, is up against the chief minister who decided to challenge him at his home ground.

Banerjee has already filed her nomination from the constituency on Wednesday.

Adhikari won the Nandigram seat as a TMC candidate in 2016 by bagging over 67 per cent of the votes, defeating his nearest CPI rival by a margin of 81,230 votes.

Earlier in the day, Adhikari urged people not to vote for "outsiders", as he flayed the ruling party for betraying trust of the people.

"I would appeal everyone not to waste your votes in favour of outsiders, who have betrayed your trust and aspirations after coming to power in 2011," Adhikari said,without naming Banerjee.

Adhikari has been calling himself "bhoomiputra" (son of the soil) and dubbing Banerjee as an outsider in Nandigram as she does not cast her vote there.

The feisty Bengal leader who represented Bhowanipore seat in the West Bengal assembly since 2011 has given up her tradition seat in favour of Nandigram.

He also asserted that people duped by the chit fund companies in the state would get back their money if the saffron party is voted to power.

"The Chit Fund scam happened because of the TMC government, their leaders looted public money," he said.

He claimed that the Trinamool Congress has transformed itself into a private limited company run by Banerjee and her nephew Abhishek Banerjee and where other leaders "neither have a say in policy-making of the party nor in the government".

"Everybody else, apart from the aunt and nephew are lamp posts in the party," Adhikari, who served as Transport minister in the state cabinet before quitting the party and switching over to the saffron camp on election eve, said.

Adhikari, recently became a voter in Nandigram from Kanthi in East Midnapore district.

Nandigram assembly constituency is set for a high-octane battle with Banerjee deciding to contest from the seat against Adhikari.

Both the leaders were prominent figures in the anti-farm land acquisition movement in Nandigram in 2007 that had catapulted Banerjee to power in West Bengal in 2011 ending the 34-year-long rule of the Left Front.

The little known rural area, which had witnessed one of the bloodiest movements against the government's acquisition of cultivable land for industrialisation, had then changed the political landscape of West Bengal.

Now after more than a decade of peace, Nandigram, home to 70 per cent Hindus and 30 per cent Muslims, is witnessing political and communal polarization.

The Muslims are firmly behind the TMC that has controlled the area for the last 15 years.

The constituency mainly comprises of two blocks -- Nandigram I and Nandigram II -- with the first having 30 per minority population and the second home to around 15 per cent of them.