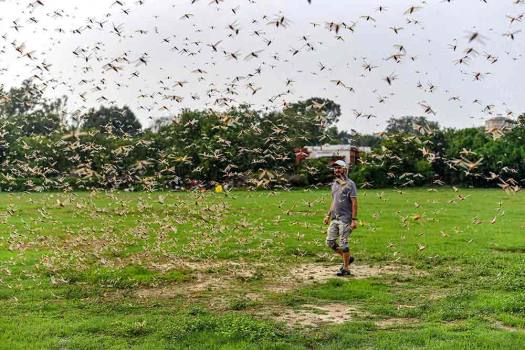 A 2 to 3 km long swarm of locusts which was in Gurugram on Saturday has reached Kasganj and Agra in Uttar Pradesh, instead of heading towards Delhi.

“The bigger swarm has headed towards Kasganj and the smaller one has gone to Agra. Considering the wind direction, they are now expected to move further towards Budaun and Etah,” Gujjar added.

The PPQS comes under the Ministry of Agriculture and Farmers Welfare and it is a nodal body to take measures on locust control through its various sub-offices across the country.

Also Read: Locusts A Potential Threat To Safe Flying, Can Even Cause Plane Crash: Experts

Locusts fly during the day and rest at night. Experts say night is the apt time to kill Locusts with chemical spray.

“We will continue the chemical spraying exercise with district officials of Uttar Pradesh,” Gujjar said.

According to Gujjar, the swarm of locusts that reached Gurugram entered India from Pakistan through Jaisalmer and Barmer border area and reached Jhujhuna. From there, they travelled to Rewari. From Rewari, they came to Jhajjhar and from there they reached Gurugram and now they are in Uttar Pradesh.

Experts say that the present locust crisis that many Indian states are faced with is intense due to the younger population of the insect.

Experts believe that the current locust invasion was part of the residue population that survived after February 17, 2020, in the deserts of Pakistan and Iran. After 1993, for the first time on May 22, 2019, large swarms of locusts invaded areas bordering Pakistan. Locust-controlling units thought that they could finish them by the end of October 2019, but the invasion continued till early February 2020.