Replying to the Motion of Thanks to President's Address in the Rajya Sabha, Narendra Modi said that he thinks "Azad Sahab is looking at everything through a political prism." 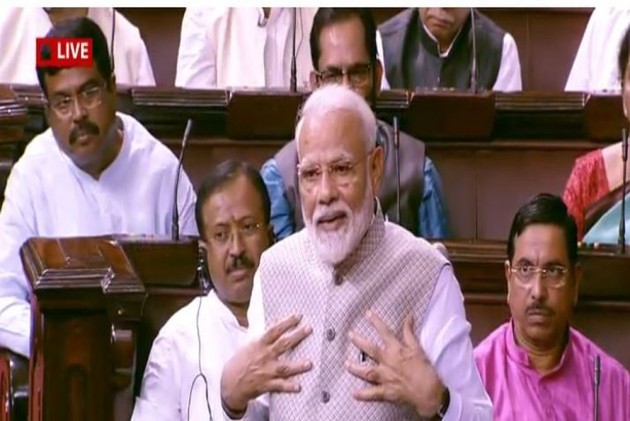 Prime Minister Narendra Modi on Wednesday used an Urdu couplet to take a swipe at senior Congress leader Ghulam Nabi Azad, two days after the latter asked the Bharatiya Janata Party-led government to "keep their new India to themselves" and return our "old India."

Replying to the Motion of Thanks to President's Address in the Rajya Sabha, Modi wrongly attributed a quote to noted Urdu poet Mirza Ghalib.

'Give Us Our Old India Where Hindus Felt Muslims, Dalits' Pain': Ghulam Nabi Azad To BJP

However, many, including lyricist Javed Akhtar, on social media pointed out that Ghalib never wrote the aforementioned couplet.

The sher that the prime minister saheb has quoted in his Rajya Sabha speech is wrongly attributed to Ghalib in the Social media . Actually both the lines are not even in the proper meter .

The prime minister also targetted the grand old party over the 1984 anti-Sikh riots, saying many who were involved in riots back then are holding "constitutional positions" today.

Speaking about the lynching of a 24-year-old man in Jharkhand, Modi said he was pained by lynchings, adding those responsible must be punished.

On Monday, Azad had launched a scathing attack on the BJP. "Give us our old India in which there was love and culture," Azad said, adding, "Hindus would feel the pain when Muslims and Dalits got hurt."

"And Muslims and Dalits shed tears when something got into the eyes of Hindus," Azad said.

He alleged in "New India", humans are each others' enemies, unlike the"Old India" wherein there was no hatred, anger or lynchings.

"Give us India where Hindus, Muslims, Sikhs and Christians live for each other," he said.

(The earlier version of the story wrongly attributed the quote to noted poet Mirza Ghalib. It has been corrected now.)