The UP government has also decided that female nurses and female policewomen will not be deployed where the Tablighi Jamaat members are kept. 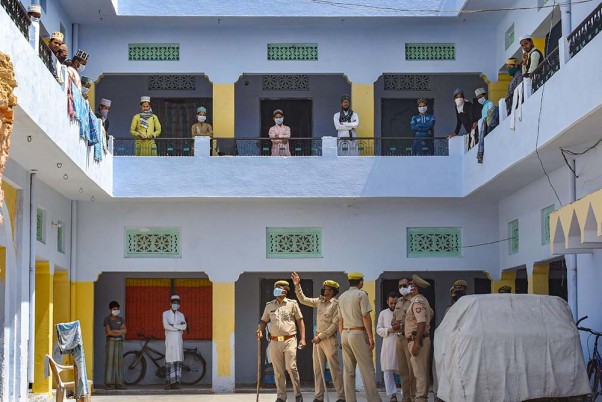 Police personnel during a search operation for devotees who had recently attended the religious congregation at Tabligh-e-Jamaat's Markaz in Delhi's Nizamuddin area, in Prayagraj.
PTI Photo
Outlook Web Bureau April 03, 2020 00:00 IST Tablighi Jamaat Members Face NSA For Misbehaving With Nurses In UP Hospital

Uttar Pradesh government has decided to book several members of the Tablighi Jamaat under the stringent National Security Act (NSA) after they allegedly misbehaved with female nursing staff and resorted to obscene behaviour at a hospital in Ghaziabad where they are being quarantined.

The members of Tablighi Jamaat was kept in an isolation ward in a hospital in Ghaziabad after they were evacuated from Nizamuddin Markaz, the headquarter of the Islamic organisation that emerged as one of the biggest hotspots of Coronavirus in the country.

According to a highly placed source quoted by news agency IANS, it has also been decided that female nurses and policewomen will not be deployed where the Tablighi Jamaat members are kept.

It may be recalled that the Chief Medical Officer of the MMG Hospital in Ghaziabad had written a letter to the Ghaziabad police informing about the 'criminal behavior of the Jamaatis'.

The CMO, in his letter, stated that the members of the Tablighi Jamaat who are kept at the isolation ward of the hospital, have been roaming in their wards naked. The letter stated that obscene comments and songs were being heard from the ward, and inmates were asking for beedi-cigarette from the staff of the hospital. The CMO also wrote that these people have also been making lewd gestures towards female employees of the hospital.

Also Read: What Is Tablighi Jamaat And Why It Is Under Spotlight

The Tablighi Jamaat group has come under severe criticism for flouting the guidelines issued by the Delhi and central governments in the wake of the Coronavirus outbreak.

The members of Tablighi Jamaat, who travelled to different states from Delhi after attending a mammoth congregation in March, became the carriers of the virus, infecting hundreds. In states like Tamil Nadu, Arunachal Pradesh and UT of Jammu and Kashmir, several cases of Coronavirus were found to have links with the congregation at Nizamuddin Markaz.