Tale Of Teen Nurjahan: From Bangladesh Village To Bengaluru Brothels, Imprisoned In Bengal

Here's the tale of a 16-year-old Bangladeshi girl who was trafficked to India, and arrested while returning to Bangladesh from Bengal 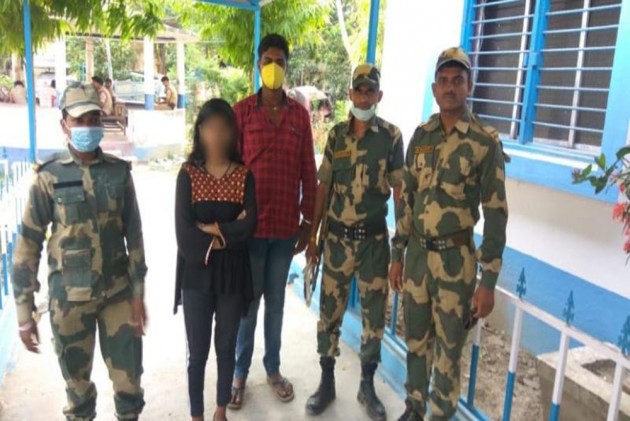 Like most adolescent girls, Nurjahan (name changed to protect her identity), from a very economically backward family in a village under Laksam Sub District of Bangladesh’s Comilla district, had dreams, aspirations, and desires. But fate had other plans, and pushed her into a dark police lockup in India.

Like many others who cross the porous Indo-Bangladesh border illegally in the hope of a better life in India, Nurjahan relied on agents. But luck didn’t favour her. While attempting to return home to Bangladesh after illegally travelling to many Indian cities, 16-year-old Nurjahan and another Bangladeshi national were apprehended by 107 battalion of Border Security Force in Panchberiya Border Outpost in North 24 Parganas in West Bengal on Thursday. The other detained person is 26-year-old Surod Biswas, who’s from a village in Jessore. While returning from Mumbai, Surod met Nurjahan through an agent at Kolkata’s Dumdum airport, sources requesting anonymity told this reporter.

Acting on a tip off, the Intelligence Branch of BSF laid a trap for the two while they were trying to cross back into Bangladesh, and nabbed them after a brief chase. They were taken to the Panchberiya Border Outpost for further investigation, and then handed over to Bagdah Police Station in Bangaon Police District in North 24 Pargana for further legal action. Local police sources confirmed that Nurjahan and Surod were produced in court on Friday. The officer in-charge at the Bagdah police station filed Nurjahan's age 18, even though she told both the BSF and a health center she had been taken to earlier that she was 16.

An Outlook investigation revealed that Nurjahan had contacted her Facebook friend Shanta Afrin Zara in Bengaluru. But Nurjahan’s mother named someone called Ishrat, and it couldn’t be verified whether Ishrat and Shanta Afrin Zara are the same person. After assuring Nurjahan that she would get a job in a beauty parlour if she came to India, Shanta put Nurjanhan in touch with her boss Sabuj from Narail in Bangladesh. Nurjahan then contacted Arul, a broker from Satkhira district of Bangladesh, who hosted her at his house for a week for security reasons before helping her cross into India illegally via Benapol against a payment of 20,000 Bangladeshi Taka. According to one source, she was caught by West Bengal police, and released after her local agent paid them Rs 70,000.

From Benapol Nurjanhan arrived in Kolkata and then flew to Bangalore with the help of agent Sabuj in the end of March. But instead of a job in a beauty parlour, she was kept under the influence of drugs for a fortnight in a brothel. She was then taken to Chennai and forced to work as a sex-worker there as well as in other cities like Bangalore and Hyderabad.

On April 22, when Nurjahan was in Hyderabad, she met an NRI engineer who works in the US and appealed for help in Hindi. After hearing her story, the engineer gave her Rs 1000 and handed over her to the police. When contacted, the engineer, requesting anonymity, said: "I couldn't follow what she was saying, and hence called my wife to converse with her. Our only concern was to send her back, and hence I dialled 100 to reach local police station. Two police personnel came in a bike near a temple and took her away in an autorickshaw.” According to him, Nurjahan told him that "she has a sister living in Chennai whom she had met and hugged recently." According the engineer’s wife, "she held a fake Aadhar card in which her name was mentioned Rita."

Sources said after being taken to the Banjara Hills Police Station, the police freed Nurjahan due to the Covid situation. This writer contacted several officers ranging from Detective officer to Sub Inspector to ACP in Banjara Hills to verify the information.

"We received a call and rescued the girl on that night. Someone from Bengaluru spoke to us, who claimed her to be her sister. Also a male friend of hers called asking us to let her go, but he didn't come to the police station when we asked him to do so,” said the SHO handling the matter at Banjara Hills police station.

“We approached to shelter homes but none of them were ready to accept her as she didn't have Covid negative test report. She kept on requesting us to let her step out for just for a while. Then she left the place. Since no case was registered against her, we didn't trace her," he added. Unaware that it was fake, the police accepted her Aadhar card at face value.

“It is often seen that brokers involved in human trafficking bring the poor and gullible girls of Bangladesh to India by luring them with good jobs and money and bring them here as prostitution. Once trapped in this swamp, their entire life is destroyed,” Alok Kumar, Commanding Officer of 107 battalion in South Bengal Frontier of BSF told Outlook.

"Lack of investigations prosecutions, speedy identification and rescue of victims are often considered one of the key reasons for failing to prevent sex trafficking," said Taslima Yasmin, Associate Professor at the Department of Law, University of Dhaka.

Outlook tracked down and contacted Nurjahan’s parents, who now reside in Tejgaon area in Dhaka.

“She reads at 8th standard at a school here in Tejgaon . She went to India to her uncle’s place but we don’t know where she is now,” said her father on the telephone. Her mother, however, said Nurjahan left home for India along with a friend Ishrat.

"Poor girls and women living in border communities are particularly vulnerable to networks of traffickers operating mostly in the 30 districts in Bangladesh (like Comilla and Jessore) close to the border with India. Each year, thousands of women and children are trafficked from Bangladesh into India for sexual exploitation," Shariful Hasan, Head of BRAC Migration Programme told Outlook. Bangladesh-based BRAC bills itself as the world’s largest NGO, and its Migration Programme has been combatting human trafficking and closely working to repatriate trafficked survivors from India.

Speaking to Outlook, Taslima Yasmin said that "in case of Bangladesh, the 2012 law (the prevention and suppression of human trafficking Act 2012) is very specific about repatriation and return of victims of human trafficking from foreign countries. Under the law, Bangladesh government has a clear mandate to assist Nurjahan’s return to Bangladesh as well as ensuring her access to legal assistance and protection services.

“And in transnational crimes the flight of victims would depend on the demands and supply trends. Most often girls who are trafficked for sex are sent to India as there are higher demands in brothels. My point is for these crimes, we have to look at it from a point of view of an organized crime prevention effort, the focus should be who trafficked her and not why she chose to cross border," she said.

"The systemically organized trafficking network from Bangladesh to Hyderabad is increasing even during the Covid breakout and that is a matter of concern for all of us,” said Dr Sunitha Krishnan, a Hyderabad- based social activist who runs shelter homes for trafficked women and girls. “The involvement of lot of people, right from West Bengal border till Hyderabad is extremely concerning," she said.

“Cross border human trafficking cases needed to be handed over to NIA, but they are not. As a result, just local people are caught. No one from the trafficking network is getting touched," Dr Krishnan remarked .

"Almost every week, we are getting girls from Bangladesh. We have our three partner organisations in Bangladesh. With their assistance, we have repatriated 26 girls to Bangladesh by air within a year. Also in just a month, we have 26 trafficked girls admitted to our shelter home here in Hyderabad," she told Outlook.