AIADMK said the duo- O Panneerselvam and K Palaniswami- were elected unopposed to the top two posts- Coordinator and Joint Coordinator respectively- that together constitute the party's apex leadership. 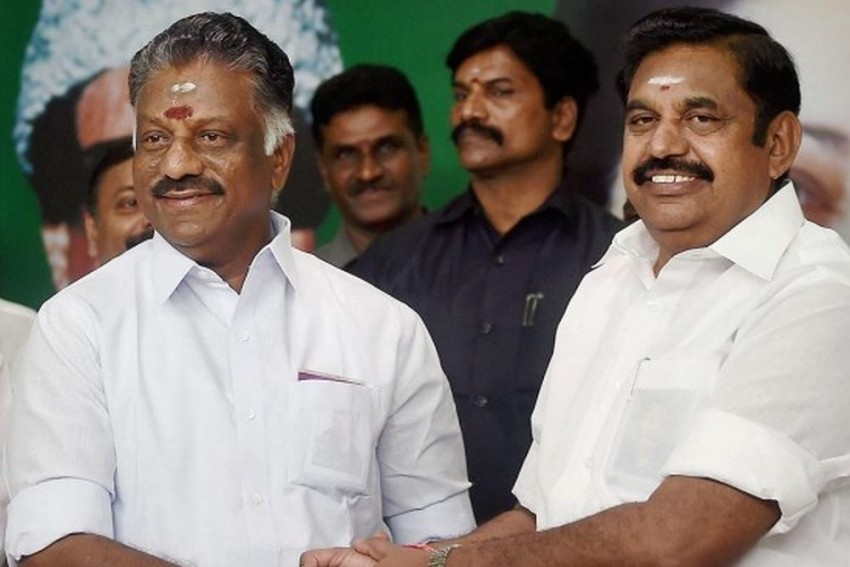 The party said the duo were elected unopposed to the top two posts that together constitute AIADMK's apex leadership.

The two leaders were elected unanimously for the first time in organisational election, while they were appointed to their positions of Coordinator and Co-Coordinator in the party's general council meet held here in 2017.

The declaration of result immediately sparked celebrations by party workers who burst firecrackers and distributed sweets at party headquarters.

Ponnaiyan, also the party's organising secretary, said only one application that was together filed by Panneerselvam and Palaniswami -to the twin top positions- was received and it was found to be in order, conforming to party bylaws.

"It is hence declared that Panneerselvam and Palaniswami are declared elected unanimously, without contest to the post of coordinator and joint coordinator," he said.

It was J Jayalalithaa (1948-2016) who was re-elected unanimously in 2014 in organisation poll as AIADMK general secretary, the then top post.

Party workers celebrated the duo getting elected to the top posts by distributing sweets and bursting firecrackers in various parts of Tamil Nadu, including Chennai, Coimbatore, Salem and Namakkal.

The two leaders had on Saturday filed nominations together at the party headquarters to contest for the posts, the last day to file papers for the apex party positions.

On December 1, the AIADMK amended its bylaws at its executive committee meet here to retain and strengthen the present leadership structure of top two positions held by Panneerselvam and Palaniswami.

According to the changes, the coordinator and joint coordinator would be elected by the party's primary members.

While the posts are two, there cannot be separate votes, as the twin positions together constitute the party top leadership, effectively a single entity.

The AIADMK had said that amendments to bylaws came into immediate effect, adding that approval would be sought for such decisions in the next party general council meeting.

In 2017, till then, the top post of General Secretary (GS) was 'eternally' set apart for Jayalalithaa and a new leadership structure of coordinator and joint coordinator was evolved.