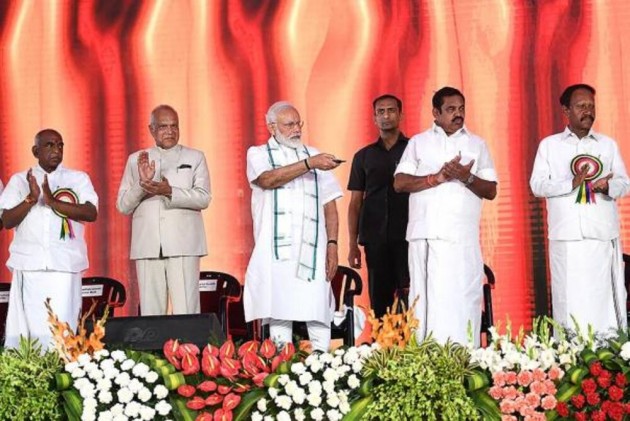 AIADMK, the reigning party in Tamil Nadu and the BJP have initiated talks concerning sharing of seats for the April 6 assembly election in the state.

Both the parties are expected to arrive at a consensus soon.

The parleys, according to a BJP senior, were cordial and the deal is likely to be clinched soon.

"Our expectation is for 60 assembly constituencies, which we have identified as winnable seats. They (AIADMK) may have their plans. The numbers which will be agreeable to both the parties will be announced," BJP senior M Chakravarthy told PTI.

The AIADMK will hold separate talks with a delegation from the PMK this evening.

Meanwhile, R Sarath Kumar, founder of All India Samathuva Makkal Katchi (AISMK) who had been in alliance with the AIADMK for a decade, called on Kamal Haasan, founder of Makkal Needhi Maiam party here on Saturday to discuss the possibility of forging electoral ties for the upcoming election.

Speaking to reporters here, he said his party had a chunk of vote bank in Tamil Nadu.

"AISMK was in the AIADMK alliance for 10 years. We waited for a call from the AIADMK, but there was no word. We have decided to move on," Sarath Kumar said and added that he would strive for a change in Tamil Nadu.

He had called on Haasan as it was nice for like-minded people to meet, said Sarath Kumar who earlier this week, called on V K Sasikala, the ousted AIADMK general secretary at her residence hereafter she returned to Chennai from Karnataka.

Announcing alliance with Indhiya Jananayaka Katchi (IJK), a political party floated by Lok Sabha MP Paarivendhar, who heads the SRM group of institutions, Sarath Kumar said he has joined hands with IJK to contest the elections "with good people."