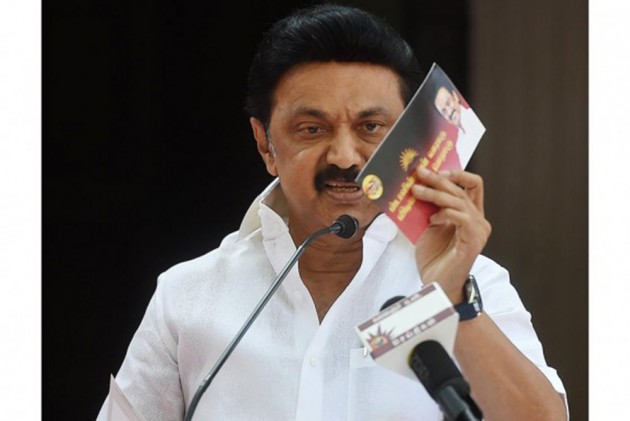 The DMK on Saturday promised to slash fuel and milk prices and provide a subsidy for LPG, while maintaining that it would reserve 75 per cent of jobs in Tamil Nadu for Tamils.

In its 500-point manifesto, out of which president M.K. Stalin read out the salient 50 points, the party has claimed that while petrol and diesel prices would be lowered by Rs. 5 and 4 respectively, a subsidy of Rs.100 would be provided for each LPG cylinder. Milk, supplied through the state-owned Aavin company, would also be reduced by Rs.3 per liter, the party’s manifesto states.

While he had already announced a monthly allowance of Rs 1,000 for housewives last week, to further woo women voters, Stalin also promised free bus travel in city buses. For students, the manifesto promised free milk for children in government schools and waiver of educational loans taken for college education. A special Covid-19 allowance of Rs.4,000 would be given to all ration card holders, to compensate for income loss. The manifesto also promised not to hike property tax in view of the pandemic.

Freebie Race Is On In Tamil Nadu: EPS Announces Assured Allowance Of Rs.1,500 For Homemakers

On the job front, the DMK promised creation of two lakh jobs and filling of all vacancies in government departments. The party joined the ruling parties of Haryana and Jharkhand in promising to reserve 75 per cent of jobs in the state for Tamils. It also said it would insist on reservation in the private sector.

To counter the propaganda that the DMK was anti-Hindu, Stalin included the following announcements in the first fifty points he read out today – a Rs.1,000 crore fund for renovation and kumbabhishekam of temples in the state, rope cars for all hill temples (mostly temples of Lord Murugan), Rs 25,000 for one lakh devotees for pilgrimage to famous Hindu temples in the country, financial support for performing artists of village temples and establishment of an international centre at Vadalur, home of famous Hindu saint Vallalar which attracts lakhs of devotees every year. He also promised to appoint 205 archaks from various communities to temples who have been awaiting jobs for years in spite of completing the qualifying course.

The DMK reiterated its promise to abolish NEET, even after a similar attempt earlier had failed to clear the legal challenge. The manifesto demanded the Centre to declare Thirukkural as a national book of importance. On the political front it promised a special court to try the corruption charges against the present AIADMK Ministers and also speeding up the enquiry into Jayalalithaa’s death. The party promised to live telecast Assembly proceedings.

Though short on freebies as in the past, the manifesto is filled with promises on various fronts which Stalin promised would be implemented without fail. “The DMK will do what it says and will say what we have done,” he quoted his father Karunanidhi. And to oversee the implementation of the 500 promises listed in the manifesto a separate programme implementation ministry would be constituted.