The long list includes DMK President MK Stalin's son, and two former TNCC presidents who have managed to get tickets for their sons 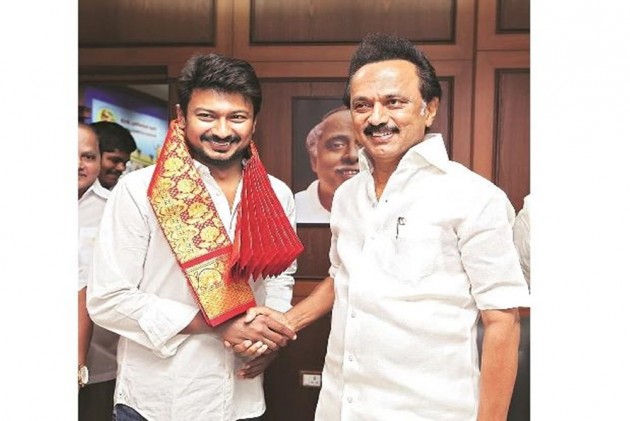 During his election campaign in the Salem district, Chief Minister Edappadi K. Palaniswami labelled the DMK as a party that promotes only the families of its leaders whereas in the AIADMK even an ordinary worker can become an MLA, Minister or even a Chief Minister.

To buttress his argument he pointed out how more than a dozen relatives of top DMK leaders have been given Assembly tickets whereas there was no such instance in the AIADMK. Udhayanidhi Stalin, given a ticket from Chennai’s Chepauk-Thiruvallikeni, leads the phalanx of similar family candidates of the DMK he noted.

An analysis of the candidate's list of various parties does support the Chief Minister’s claim as the DMK has given tickets to 17 persons who are either direct descendants or close relatives of the party’s bigwigs. The Congress is a close second with at least six such candidates out of which four are the sons of top Congress leaders – present and past.

In the DMK, along with Udhayanidhi son of party president M.K. Stalin, Vetrialagan, the grandson of former DMK general secretary K. Anbazhagan (who remained a loyal number two to Karunanidhi for decades) and TRB. Raja son of former Union Minister T.R. Baalu (who is party Treasurer and a Lok Sabha MP) lead the list of family candidates. Other than Stalin and his son Udhayanidhi there is another father-son duo being fielded by the DMK in this election – former Minister I. Periasamy and his son Senthilkumar are contesting Athur and Palani seats respectively. J. M.Hasan, son of former MP J. M. Haaroon has been fielded from Velachery in Chennai.

Among the dynastic candidates are children of DMK’s former Ministers who are not alive any longer – Palanivel Thiagarajan from Madurai Central, Thangam Thennarasu from Thiruchuzhi and Dr Poongodhai Aladi Aruna from Alangulam. Their fathers used to be Ministers in the Karunanidhi cabinet. Similarly, children of powerful leaders who had converted their districts into fiefdoms also find a place in the DMK list. “Many of these people like Thangam Thennarasu and Poongodhai have proven track records as efficient Ministers in the DMK government between 2066 and 2011. Someone like Palanivel Thiagarjan left his job in the US to head the DMK’s IT wing and many others have excellent fieldwork to their credit to deserving these nominations. Their family connections alone did not get them the tickets,” pointed out DMK spokesperson A. Saravanan.

In the Congress list, two former TNCC presidents EVKS Elangovan and S. Thirunavukkarasa have managed to get tickets for their sons Thirumagan EVR and T.S. Ramachandran. Thirunavkukarasar was an MoS in the Vajpayee government before shifting to the Congress and presently is Lok Sabha MP from Tiruchy. Elangovan lost a close Lok Sabha contest from Theni in 2019 but has managed to wangle a ticket for his son. The CLP leader in the outgoing Assembly K. R. Ramaswamy opted out of the race this time but not before ensuring a ticket to his son R. Kariyamanickam.

Former Union Minister Rangarajan Kumaramangalam’s son Mohan Kumaramngalam has been rewarded with the Omalur seat in Salem district, from where the Kumaramangalam family hails. Another Congress Lok Sabha MP Manickam Tagore has got a ticket for his father in law from the Melur constituency while former Congress MLA Oorvasi Selvvaraj, citing old age, got a ticket for her son Amritharaj. The Congress has nominated Vijay Vasanth for the Lok Sabha by-election caused by the death of his father Vasanth Kumar, thus completing the family circle in these elections.

“Many of these candidates have creditworthy party work. For example, Ramachandran lost the 2016 election by a margin of fewer than 2,000 votes but still has been nursing the Aranthangi constituency which his father has represented five times. Similarly, Thirumagan has been leading the party’s state-level social media team for the past three years. We also have to choose candidates who have chances of winning as the voters readily recognize their family’s contribution to the area,” pointed out Congress spokesperson D. Gopanna.

“At the same time, our candidate list does not feature sons or daughters or nephews. The BJP and PMK have also avoided giving tickets to family members of any of their leaders,” pointed out Fisheries Minister D. Jayakumar. After there was criticism about Deputy CM O. Panneerselvam getting a Lok Sabha ticket for his son Raveendranath (who incidentally is the lone NDA winner from the state in 2019), he resisted demands from his local party functionaries that his second son Jaipradeep be fielded in the Assembly election.