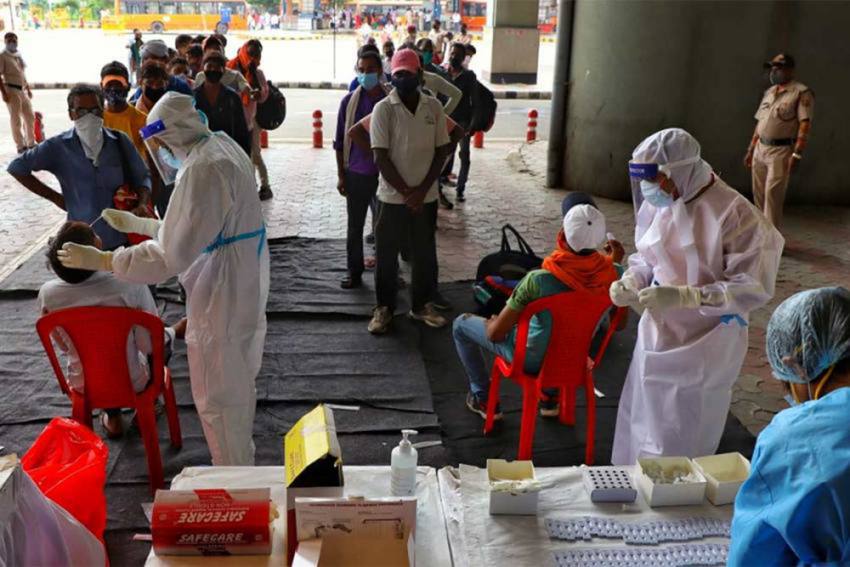 A citizens’ survey has rated Tamil Nadu best among 17 states for its handling of the health crisis in the wake of the second wave of Covid-19 in April and May when people were scrambling for hospital beds, oxygen, medications and testing facilities for the treatment of their dear ones.

The second wave of Covid-19 tested the pulse of every state government of the country and their efficiency to handle the outbreak vis-à-vis governance with the daily cases rising from close to 47,000  (3rd week, March) to more than 412,000 cases (1st week, May 2021). Infrastructure in most hospitals in cities crumbled and failed to provide adequate treatment to patients waiting in line, due to a sharp increase in cases. Even crematoriums in major cities ran out of space as bodies were brought for final rites.

“Overall, the second wave of the pandemic has caused a devastating effect on India and its citizens that will be etched for many years to come,” states LocalCircles, a citizens forum with a pan India presence. 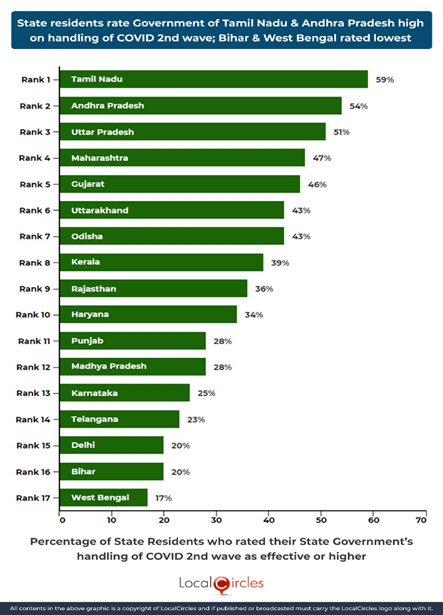 The sudden surge in Covid positive cases in states like West Bengal, Assam, Tamil Nadu, Kerala is attributed in part to the state elections held between March and May.

The survey, carried out in the aftermath of the crisis in April and May received 38,991 responses from citizens spread across 17 states and 383 districts of India. The responses from the rich and poor people from urban and rural areas ranked Tamil Nadu and Andhra Pradesh at the top while Delhi, Bihar and West Bengal were rated the worst. Both the Central and State Governments faced testing times to contain and mitigate the second wave of Covid-19 that eventually forced many states to observe lockdowns and restrictions on public movement.

The Indian Council of Medical Research (ICMR)-approved testing facilities were limited in various states where reports of RT-PCR tests took about 3-4 days to be produced, leaving many patients in the lurch without a hospital bed as they did not have the positive Covid test report.

The survey report reveals that during the time of distress, while caregivers were running from pillar to post seeking aid and treatment for the patient, many became the victim of black-marketing and scamming. During such an emergency as patients were gasping for oxygen, some perpetrators were charging out-of-pocket rates to caregivers of the patient for an ambulance service, even auto drivers exploited people needing to go to the hospital. Hospitals ran out of ICU beds, oxygen cylinders, and medicines required to treat the Covid patient.

Experience of people revealed that many patients had to wait endlessly in line for the treatment in almost every district hospital. Eventually, lack of timely treatment became a major cause of most Covid-related deaths, some of which did not even find a mention on the official record, the survey revealed.

The LocalCircles in a statement sets out that the objective of the survey was to help both the citizens and the government to understand where things went wrong and what needs to be worked upon in the event of a third Covid wave, which some medical experts have projected could happen in 6-8 weeks.

Taking cognizance of the early warning of the third wave with children at high risk, the Central Government has issued guidelines for the care and protection of children affected by Covid-19 and has fixed responsibilities for the states, district magistrates, police, Panchayati Raj institutions, and urban local bodies.