'Was this a question of censorship?' asks a statement published online after panel discussion was abruptly cancelled. 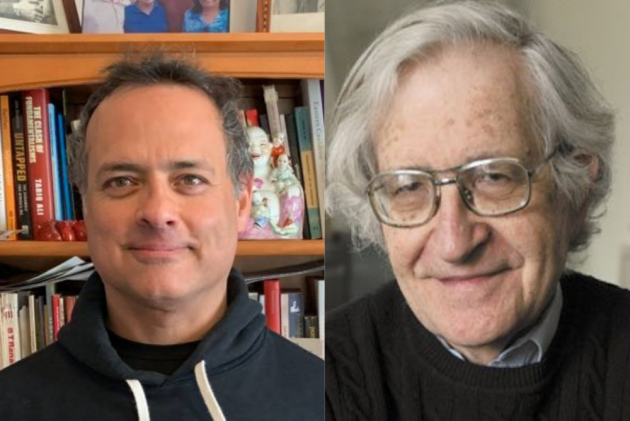 Their panel was slated to take place from 9pm IST on Day 5 of the Tata-sponsored Mumbai LitFestival and was expected to delve into tackling the dangers of 'climate change and nuclear war'.

All sessions at the Tata Lit Live! Mumbai Litfest promise to be engaging & enlightening. Here are just a few unmissable sessions with some of the biggest names in the literary world.

In the statement issued on People's Dispatch, Chomsky and Prashad said that they were informed of the event's cancellation in a mail. "Then, out of nowhere, near 1 pm Indian Standard Time, we received an email which said, cryptically, ‘I am sorry to inform you that due to unforeseen circumstances, we have to cancel your talk today’," they said in the online release.

The release further added: "Since we do not know why Tata and Mr. Dharker decided to cancel our session, we can only speculate and ask simply: was this a question of censorship?"

Statement by Noam Chomsky and Vijay Prashad on the @tatalitlive festival; why were we cancelled?https://t.co/0UC3hOE6yW

A day before the panel discussion, Chomsky and Prashad  said they would start the event with a statement that "makes it very clear how we feel about corporations such as the Tatas, and the Tatas in particular."

This was in response to a boycott appeal by activists, academics, and artists, urging Chomsky to not attend the literature festival sponsored by the Tata group. "It comes as a great disappointment to us, as the Tata Group has had a long history of forceful displacement, human rights violation, and environmental plunder," the letter addressed to Chomsky said.

"The Literature Festival and other such events by the Tata Group are evidently an attempt to erase its crimes from the public consciousness -- an ideological whitewashing," the letter further added, referring to the construction of steel plants on Adivasi lands and other alleged human rights violations.

Chomsky and Prashad declined to boycott the festival but said they would begin with a statement about what they think about big corporations.

"We will then continue our conversation about Noam's' book, Internationalism or Extinction, making various connections between the general themes in the book and the Tatas," they said in their reply.

The boycott appeal, as well as Chomsky and Prashad's response, were published on a website called Counter Currents.

Their online statement post cancelling of the panel discussion mentioned topics that would have covered in the course of their talk. "We were going to talk about the broad issues that threaten the planet, but then also talk about the specific role of countries such as India and corporations such as the Tatas."

Issues about the Citizenship Amendment Act, Adivasi killing, the industrialisation of indigenous lands and environmental degradation would have been taken up.

"We wanted to talk about how governments such as those led by the Bharatiya Janata Party and corporations such as the Tatas are hastening humanity towards a deeper and deeper crisis,...We wanted to appear at this platform in the spirit of open discussion to hold our dialogue about extinction and internationalism, about the darkest part of our human story and the brightest sparks of hope that shine in our world." the statement added.

The two have announced that the discussion would be held separately, with a date and venue to be finalised later.