After a rout in the recent Lok Sabha elections, the Telugu Desam Party (TDP) under Chandrababu Naidu appears to be on the verge of a split. 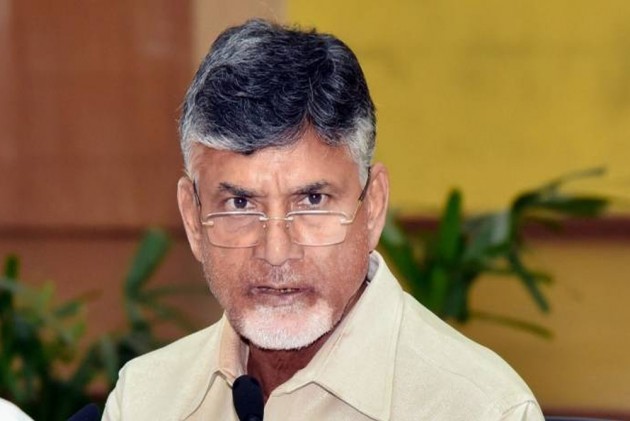 As you sow so shall you reap. This adage aptly applies to former Andhra Pradesh Chief Minister and Telugu Desam Party chief Nara Chandrababu Naidu after four of his party’s Rajya Sabha members joined the BJP.

Among those who switched sides, two members -- YS Chowdary and CM Ramesh -- were Naidu’s confidantes and major beneficiaries in the erstwhile TDP government.

The defections, that too at a time when their party chief is on a holiday in Europe with his family, reminds the way Naidu had engineered the coup against his father-in-law and former Chief Minister late Nandamuri Taraka Rama Rao, a year after party’s resounding victory in 1994 polls. NTR cried for justice for his unceremonious removal as the TDLP leader and chief minister of undivided Andhra Pradesh.

After a rout in the recent Lok Sabha elections, the TDP under Naidu appears to be on the verge of a split. Reports say 15 of 23 MLAs, led by another senior party leader and former minister Ghanta Srinivasa Rao, are set to join the ruling YSRCP.

The TDP, which is the only principal party after the total rout of Congress, is facing an identity crisis.

There are also rumours that another Congress member Konda Visweshwar Reddy, who failed to retain his Chevella Lok Sabha seat in 2019 polls, after defecting from TRS to the Congress, may join the BJP. On being asked if he is joining the saffron party, Visweshwar Reddy said, “I enjoy the luxury of taking decisions in the interests of people of my constituency as I have no personal agenda for political gains.”

Many also feel that the BJP is preparing the ground to capture power in 2021 assembly polls in Telangana. The BJP would like to seize the opportunity if the aggrieved leaders in the ruling TRS, as well as some erstwhile TDP leaders who worked for that party since its formation in 1983, choose to switch their loyalty to the saffron party.

Incidentally, the BJP’s decision to admit tainted TDP MPs like Chowdary and Ramesh has raised many eyebrows. “Is it not Modi government which allowed ED and IT officials to conduct a series of raids on properties and residences of these two leaders during polls? If they now decide to join the BJP, does one require anything more to explain their intentions?

“That apart, how can the BJP, which claims it is a ‘party with a difference’, admit such tainted and rogue MPs,” told another senior TDP functionary, who wished not to be quoted.

Meanwhile, TPCC chief Uttam Kumar Reddy says that TRS is targeting the Congress as it has sizeable MLAs to question, with all sorts of promises. “If, our members chose to fall prey, what I can do?” he added.

The credibility of the TDP and the Congress have suffered. Their stock is very low. Their local leadership cannot inspire people. So, their prospects for revival appear bleak. In such a context, the BJP offers them prospects to remain politically relevant. After all, the BJP wants to succeed in its ‘game plan’ or ‘mission target 2022’ to capture these two states, which were Congress or TDP bastions, while it was undivided.

Many old guards in the Congress are optimistic that none can dare ‘kill’ the party as it is like a banyan tree. Septuagenarian Congress leader M Kodanda Reddy says the change of guard at the Centre and state may rekindle party hopes as many youths believe that it’s only the Congress which can protect the country’s secular fabric.