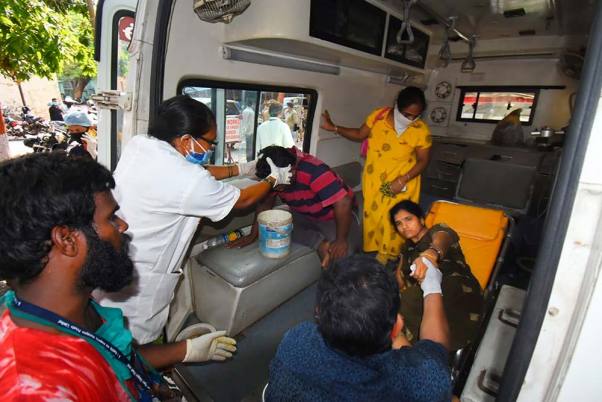 A technical glitch in the refrigeration unit attached to the two styrene tanks at a chemical plant near Visakhapatnam caused the vapour leak that killed 11 people and affected around 1,000 on Thursday, a senior district official said quoting a preliminary report.

"Styrene monomer is normally in a liquid state and is safe below a temperature of 20 degrees Celsius. But, because of the malfunctioning of the refrigeration unit, the chemical started gasifying," he said, quoting the preliminary report submitted by the Factories Department.

Styrene gas is a colourless or light yellow flammable liquid primarily used in the production of polysterene plastics and resins.  It is used to manufacture plastics and rubbers, which are used in containers for foodstuffs, packaging, synthetic marble flooring, disposable tableware and moulded furniture.

Also Read: What Is Styrene, The Gas That Killed 11 People In Vizag. How Dangerous Is It?

The technical glitch caused the temperature in the chemical storage tank to rise above the safety level of 20 degrees, leading to gasification and consequent evaporation of styrene.

As many as 11 people, including children, were killed in the early morning gas leak, that raised fears of a serious industrial disaster.

After the leak, the gas spread to the surrounding villages of Venkatapuram, Padmanabhapuram, BC Colony and SC Colony, with Venkatapuram being "predominantly worst
affected", the Collector said.

Between 3.45 am, when the leak supposedly began, and 5.45 am, the concentration of styrene vapour was "extremely high", so much so that none could enter Venkatapuram village.

"Only around 9.30 am could we understand what exactly it was as the thick fog that formed in the area cleared. As the emission was still happening and it could take 12-24 hours to bring the vapour to zero level and totally diluted, people of these villages have been asked to stay away," Chand said.

He added that the situation needed to be monitored for 48 hours to ensure it reached the safe level.