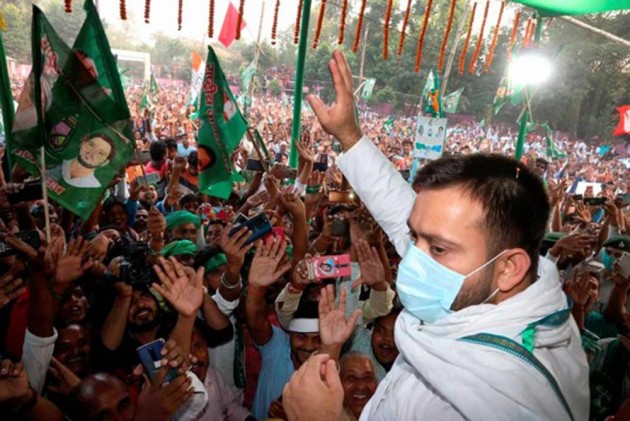 Exit polls have predicted the ouster of the Nitish Kumar government after 15 years in power, clearing the way for RJD leader Tejashwi Prasad Yadav to take over as the youngest-ever chief minister of Bihar. With a disclaimer that such polls have often turned out wrong, here are 10 takeaways if the exit poll figures turn out to be true on November 10.

Tejashwi Prasad Yadav’s emphatic promise that his first signature as the chief minister would be on the decision to provide 10 lakh government jobs appears to have done the trick. It earned him massive support from the youth in the state facing a staggering unemployment crisis, with the state currently having an unemployment rate of more than 46 per cent.

Even though the top leaders of the BJP, time and again reiterated that LJP president Chirag Paswan’s decision to contest the polls all by himself “against Nitish Kumar but not against Prime Minister Narendra Modi” was not part of their agenda, it sowed the seeds of suspicion in the minds of voters about a possible tacit understanding between BJP and LJP in their bid to weaken Nitish Kumar.

Nitish went hammer and tongs against Prime Minister Modi in the last assembly elections and became the chief minister during his third term as an ally of the RJD and Congress. But he returned to the BJP a year and a half later to form the NDA government once again. It did not go down well, especially with the Muslim voters, who returned to RJD to reconsolidate Lalu’s once-famous Muslim-Yadav (M-Y) vote bank of about 30 per cent.

When the nationwide lockdown was enforced in March, Nitish was quick to advise the Bihari migrants not to leave the place where they were working because of the pandemic. He went on to say that nobody would be allowed to enter Bihar, but the exodus of poor migrants on foot from different states with their families caught him unawares. His announcement was construed as being anti-migrant.

Even though Bihar’s casualty rate remained one of the lowest in the country during the Covid-19 epidemic, he was pilloried for mishandling the situation due to an inadequate number of tests, especially in the hinterland.

Nitish has been in power for 15 years on the trot and there seemed to be a strong anti-incumbency wave in the state. Huge crowds at a young Tejahswi’s rallies were a tell-tale sign of that.

During Nitish’s first half of his 15-year tenure, there was no patch on his second half in terms of Bihar’s development. His political switchovers since 2013 -- from BJP to RJD to BJP – had an adverse impact on his avowed development agenda in the latter half.

Nitish himself may not have faced any corruption scandal but the Muzaffarpur shelter home case and Srijan scam took the sheen off his government, which otherwise boasted of zero tolerance towards corruption in public life.

He may have returned to NDA in 2017 but JD-U ceased to be BJP’s big brother in the alliance. Now, they were equal partners. If there were any doubts about it, it was dispelled when BJP declined to give JD-U more than one berth in the Union cabinet after the 2019 general elections even though it had 16 MPs. It widened the chasm of difference between the old allies.

Nitish’s decision to announce that it was his last election towards the end of his campaign seemed to be a tactical mistake by him, as it gave an impression to the electorate that he was indeed on a sticky wicket and was making such an impassioned plea in the face of an imminent defeat.