The Opposition has been quick to attack the government over shoddy management of the worst rains in decades. 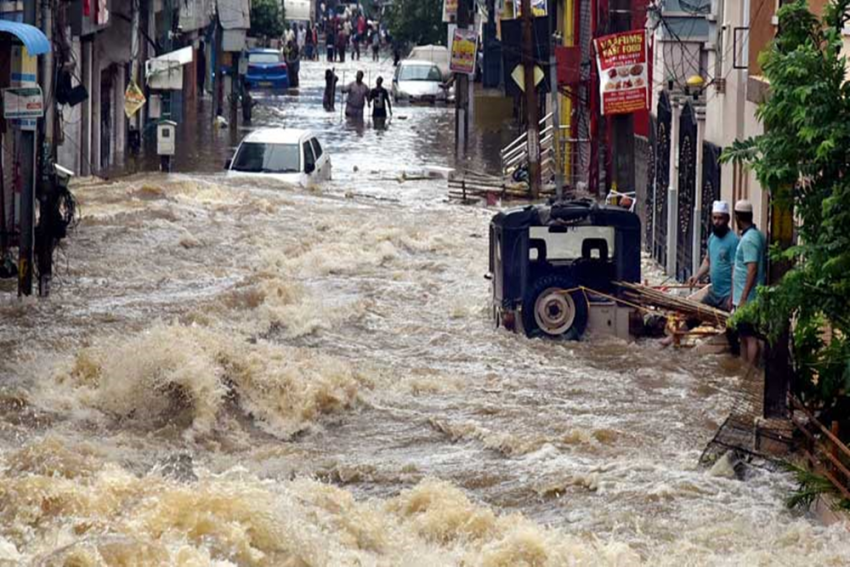 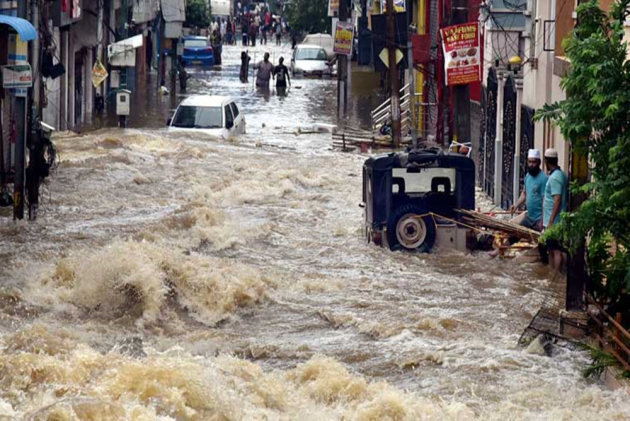 Chief Minister K Chandrashekhar Rao (KCR) and his son and Municipal Administration Minister K Tarakarama Rao (KTR), have been promising to turn Telangana into a “Golden State,” and a Greater Hyderabad on the lines of Singapore or Kuala Lumpur. They also promised major districts in the state would have smart cities with ultra-modern facilities.

But the two-day incessant rains which ravaged the state have exposed the pathetic condition of the state. The rains have not only claimed more than 32 lives so far in Greater Hyderabad Municipal Corporation limits alone but also caused immense hardship to the people in several other parts of the state. Videos of cars being washed away in floodwaters and a gushing waterfall from PVNR expressway, one of Asia’s longest flyovers, besides ‘floating restaurants’ in the old city of Hyderabad, clearly expose how far those promises are from reality.

As jokes like “KCR fulfills his promise to ensure water to every household”  flooded social media platforms, the helpless government chose to declare a two-day holiday for all public and private institutions in the city.  The unexpected downpour, said to be worst in 30 years, caught the GHMC officials napping.  The oppositions believe poor civic planning, a pathetic drainage system, and bad maintenance of lakes are the main reasons for the crisis. In fact, city dwellers had been experiencing similar traffic snarls and overflowing drains during every monsoon for the past few years.

Almost all colonies in and around Hyderabad, barring a few, were inundated, particularly the unauthorized colonies that have sprung up near nalas and lake-beds. The River Musi, which had last been in spate more than six decades ago, led to a major overflow from Himayatsagar and Osmansagar lakes, both once the main source of drinking water for the region. Several bridges on river Musi linking the new city with the old were also under deluge, the worst affected being the 13.5 km long PVNR Expressway, which links the city to the Bengaluru national highway.  Several national highways, including the Hyderabad-Chennai, Hyderabad-Nagpur and Hyderabad-Bengaluru highways were also affected.

Substandard repair works being carried out by the state’s road and building department also got exposed as the flyover was forced to close and turn into a waterfall.  Videos showing the gushing waters from the flyover went viral, with titles like ‘Watch and enjoy our  Nigara waterfalls.”

Blackouts were also reported from various parts of the city and state due to disruption of power supply, caused by uprooted trees and submerged feeder stations.

The Nagarjuna Sagar dam’s 10 flood-gates were opened after a long time.  So were those of lower Maneru and Sriramsagar dams in neighboring Nalgonda, Medak, and Nizamabad districts. Meanwhile, the Met department forecast warns of possible heavy rain during the next 48 hours, especially in Hyderabad, Sangareddy, Rangareddy, Medak, Vikarabad, Siddipet, Sircilla, Kamareddy, and Nizamabad districts.

The ruling TRS is worried most as the elections to the Greater Hyderabad Municipal Corporation are due next month. The government had also handpicked a recently retired IAS officer, who is amenable to the ruling party, as the new state election commissioner and he in fact had also begun the process for conducting GHMC polls.  In the last polls, the TRS had won 99 of the total 150 corporation wards, while its ally AIMIM won 44,  leaving hitherto predominant BJP (4) and Congress (2) high and dry.

The Opposition, especially the Congress and BJP, have jumped at the opportunity. to attack the government. The state BJP, which is riding high following its resounding victories in three parliament constituencies, is determined to take maximum advantage of the upcoming GHMC polls.

“The Chief Minister seems to be more interested in taking care of his own family.  He might have succeeded in ensuring his unemployed daughter Kavitha, after losing badly in last parliament polls, get elected to the state legislative council.  Neither he nor his irresponsible son KTR are bothered to take disaster management plans, in case of such calamities, by well equipping the GHMC engineering officials or civic staff or provided needed funds to modernize roads and nalas, besides good maintenance of drains and nalas from time to time dredging,” says senior Congress leader Marri Shashidhar Reddy.

“We had been finding fault with KCR over his government’s priorities.  Instead of improving civic amenities, his government is spending more energies and tax payer’s money on building new secretariat. It (new secretariat) could have been the least priority in any responsible party’s ‘good governance’ agenda,” said Says the BJP’s chief spokesperson K Krishna Sagar Rao.

Meanwhile, sources said the state government might use the rains as an excuse to postpone the GHMC polls beyond January.

Cinemas In India Reopen After Seven Months In COVID-19 Shadow