'Tell Me What Do I Do? Steal, Or Kill Myself?': Migrant Worker On Delhi Covid Lockdown

‘Corona won’t be able to reach us because we would have been dead by then. Dead by starvation,’ says Renu, whose husband lost his job two months ago. 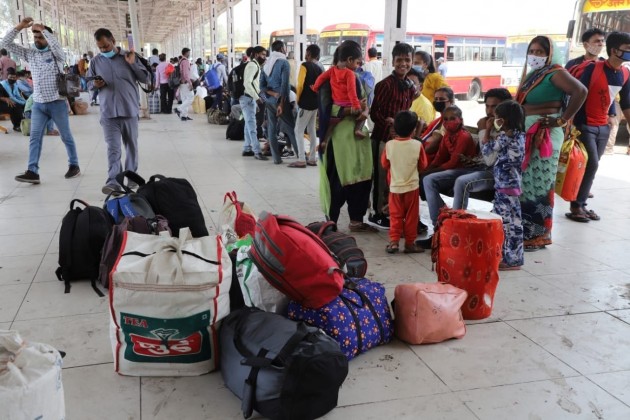 Shortly after noon on Monday, Delhi Chief Minister Arvind Kejriwal announced a six-day lockdown after a record spike in Covid cases brought the capital to the brink of collapse. With folded hands, he urged migrant labourers to stay on in Delhi, saying “Mai hoon na! Mujhpar bharosa rakhiye (I’m here, please trust me).”

But while this request was received with admiration by a section of the middle class, it didn’t cut much ice with the slum dwellers in the Bawana Industrial Area.

“Tell me what do I do? Steal or die by suicide?” asks Sonu, a migrant worker from Mau, Uttar Pradesh who lost his job last month when the factories in Bawana began to shut down. For the 29-year-old who is a father of three children, the youngest barely six months old, dying by suicide seems preferable to watching his children die of starvation.  Due to a sudden drop in demand, most of the factories in the area have been shut for the past one and a half months, leaving hundreds jobless.

One Virus, Second Wave And Multi-Fold Miseries Of Migrant And Informal Workers In India

Since the day Sonu lost his job, he is down to one meal a day, just so he can send some money home. He hasn’t been able to pay his rent and electricity bills. “Very soon, the electricity connection will be lost,” he says. For more than a month, he has been running from pillar to post in search of a job. Food delivery agent, cleaner, security guard--he has tried his luck everywhere. Even borrowing isn’t an option, since all of his friends are jobless. After all these unanswered knocks, he has no option but to go back home. “Even there I might die of hunger but at least I would be with my children,” he says.

“We are not even able to earn enough to feed ourselves. All of us are scared that it will be even worse than last year,” says Upendra, another migrant from Uttar Pradesh who works as a plumber.  More than 35 families in the area have already left while many others are planning to leave. “From the past 2-3 days, I have been witnessing families in large numbers waiting at the bus stop (to leave),” he says. 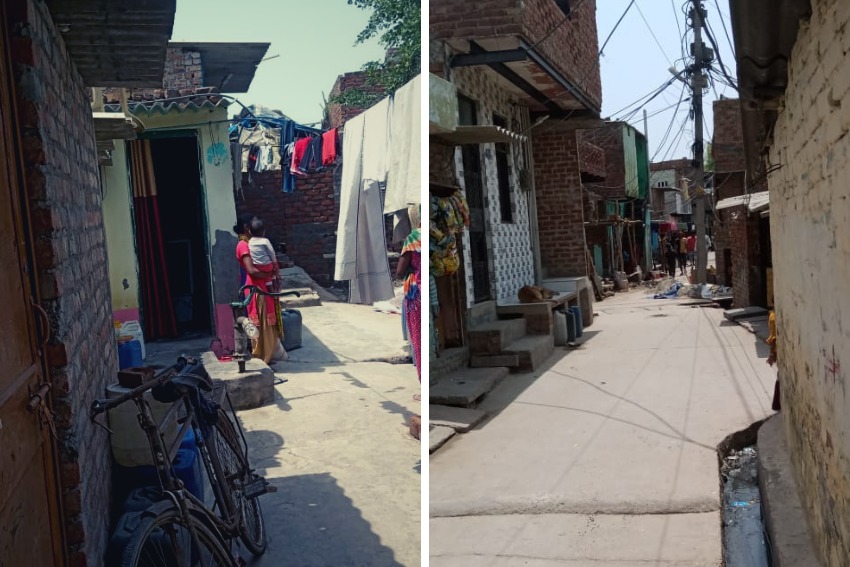 Upendra's wife and child standing on the deserted streets of the slums in Bawana Industrial Area, New Delhi.

For these workers paralysed by the first lockdown and the homelessness thereafter, another abrupt and unplanned lockdown seems no less than a kick on their knees. “We would have trusted him if he had arranged ration or cooked food for us before making the announcement, says Upendra on the Chief Minister’s assurance. “How is it different from the last year?”

The migrants here are also not very hopeful of Delhi government’s promise to pay 5000 rupees to registered workers. Most of the workers in the area are in the unorganized sector, and registration is primarily applicable for construction workers. So despite all the promises, all of them face the abyss of poverty, desperation and hunger.

“We have lost the very few savings we had. Nothing can help now,” says Renu, mother of a one-year-old, whose husband lost his job two months ago. “Corona won’t be able to reach us (back home) because we would have been dead by then. Dead by starvation,” she says stoically when asked about the government’s battle against the pandemic.

The sight of these dejected souls walking on the long road back home might be dismal, but it is not unexpected. The government had a complete year to pull up its socks and work towards a robust relief mechanism to avoid the devastation which befell the poor workers in 2020.

All of us were witnesses to the country’s biggest exodus since partition, hungry souls ignored and neglected by those elected to govern them. Millions of men, women, children and elderly walking miles and miles, many dying on the way. Pregnant women giving birth on the roads, people walking with sore and bleeding feet, kids screaming in pain while trying to put their feet on the ground.  We saw hapless migrants dying in road accidents. Some were run over by trains in their sleep, and it’s hard to erase images of their corpses next to the uneaten rotis on the railway tracks, or the horrifying video of a toddler trying to wake up his mother, who had died aboard a train and was dumped on the platform.

Many still believed that the second wave was sudden, and the government can be excused because it wasn’t prepared. But after a year of hopelessness, grief and empty promises holding their lives together, the migrant workers are again standing barefoot on the endless roads. For them, last year meant no food, no job, no home, no hospital to go to. This year, there’s a new addition to the list -  no burial or cremation ground.

Expecting them to have faith in the government after what happened last year and what is happening today, would be naive and selfish expectation, shorn of the reality. Instead, the questions should be directed towards the government which somehow prioritised religious gatherings and election rallies over the ongoing pandemic. A lockdown without a pre-planned mechanism to ensure food security and a robust relief system is no less than another pandemic for those who can light up the stove only with their daily wage in hand. The government is currently overlooking the pandemic of starvation while battling the pandemic of covid. And until these priorities are addressed, each pandemic will claim a bonus of men, women and children who die hungry and hopeless on the long road back home.