Tell People If You Support Or Oppose Abrogation Of Article 370: Shah Dares Congress-NCP

Speaking at a rally in Mumbai, Amit Shah's speech largely focused on the Centre's decision to scrap Article 370 and the benefits it would accrue to the country and people of Jammu and Kashmir. 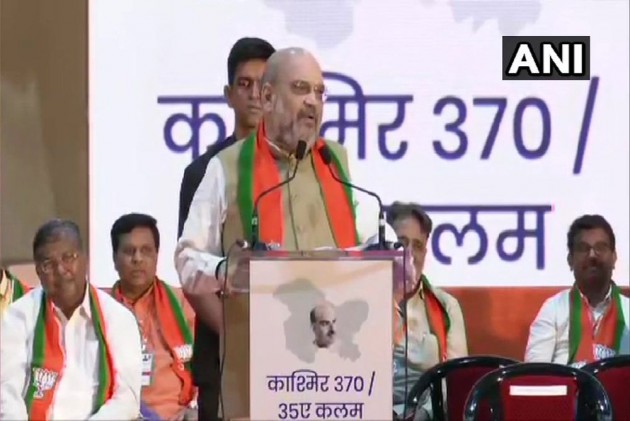 Home Minister Amit Shah on Sunday, in a fiery speech ahead of elections to the Maharashtra assembly, launched a scathing attack on rivals -- Congress and Nationalist Congress Party (NCP) -- asking if their leaders, Rahul Gandhi and Sharad Pawar, to tell the people if they supported or opposed the abrogation of Article 370.

Speaking at a rally in Mumbai, Shah's speech largely focussed on the Centre's decision to scrap Article 370 and the benefits it would accrue to the country and people of Jammu and Kashmir.

Former Prime Minister Jawaharlal Nehru, who has been repeatedly targetted by the saffron party over the Kashmir issue, was once again a subject of criticism, this time over the "non-integration" of Kashmir.

"PoK wouldn't have come into existence, had Nehru not declared an untimely ceasefire with Pakistan," Shah said, adding "Sardar Patel should have handled the matter" and not the first prime minister of the country.

The BJP president said the grand old party sees politics behind the scrapping of Article 370, the BJP doesn't.

Speaking of the current situation, Shah said not a single bullet had been fired in the Valley following the scrapping of J&K's special status, adding "terrorism will be finished in the coming days."

Shah said three dynasties, presumably Abdullah, Mufti and Gandhi, didn't allow the anti-corruption bureau to be set up in the state. "Those who indulged in corruption in Kashmir now
feeling the heat despite the cold there."

The home minister congratulated Prime Minister Narendra Modi for his "bravery and grit".

"He (PM Modi) removed Article 370 and 35A in the very first session of the Parliament as soon as we formed the govt for the second time with 305 seats," Shah said.

Shah also expressed confidence that Devendra Fadnavis will again be the chief minister after the state polls next month.

The state Assembly elections will be held in a single phase on October 21 and results will be declared on October 24.